A Weekend of Michelin Plates in New York City

*Please note: I want to assure readers that I did not visit New York City during the current COVID19 pandemic, but months before any mention of it. Everyone please be safe and follow rules & guidelines provided by your local officials.

Browsing through my blog, I'll admit that an overwhelming majority of the restaurants featured include fine dining cuisine establishments where garnishes are placed on dishes using food-grade tweezers and wines are listed in a separate menu. With that being said, I'll be the first to acknowledge that delicious food does not have to be presented by a service team of three wearing white gloves. For this post, join me on a weekend of foodventure in New York City, where I'll be enjoying more casual, Michelin platted restaurants and notable drinkeries I've been wanting to Sipped That at. For a quick refresh on the recognition of a Michelin Plate versus a Michelin Star, see the second paragraph here.

It's almost noon on a Friday morning as I'm headed to lunch, navigating the ever-changing labyrinth that is New York City. Like every other visitor in the Big Apple, I'm very much looking forward to the weekend. Blossom, as in growing from the earth, is a 100% vegan restaurant in the Chelsea neighborhood, the original of their two locations. As I get seated the by the window in the cozy dining room of the historic two story building, snowflakes start to fall against the backdrop of brown brick buildings and yellow cabs, one of those NYC moments. Blossom has been cooking up vegan cuisine since 2005 - before it was cool - creating new dishes, and new ways of imagining vegan food, by recreating classics with inventive plant based ingredients. I recently read that for every red meat meal a person eats a day, they are 12% more likely to develop diabetes, so why not introduce more green dishes into your diet?! Quite the hearty meal, perfect for an 11 block walk to catch my Boston Celtics take on the Knicks. For ideas on recipes you can make at home and more information on Blossom visit www.BlossomNYC.com . 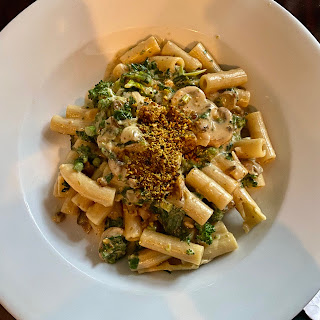 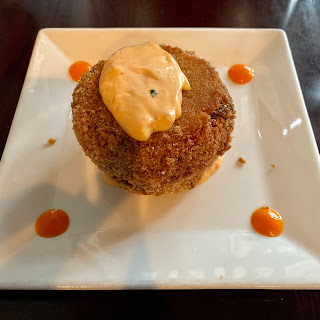 The Celtics beat the home team! Afternoon has turned into evening and that picturesque snowfall is now not so lovely sleet. Unprepared for the elements, I think to myself "taxi time!", but hailing a cab after an event outside Madison Square Garden, in bad weather, on a Friday is no easy feat. Half way through my umbrella-less stroll in the rain to Hell's Kitchen neighborhood, I ask myself if this is pay back from the Manhattan gods for the Celtics winning.

As I step into Mercato and shake the rain off, a feeling of warmth and homeyness comes over me. The exposed brick walls, miss-matching wood furniture & tarnished cutlery, and an old school Michelin Man on a shelf behind the inviting five seat bar brings me to a time where movies were filmed in monochrome. I pass on the corner table by the entrance and get a tour through the cozy restaurant to the rear dining room. Old Italian movie posters on the wall, cast iron cookware hangs off the ceiling and you know they are serious about their wine as a cellar taking up one sixth of the room sits in the corner where there could have been more tables.

Both culinarily trained in Italy, Emanuel & Daniele's menu evoke the spirit of the mother country. Individually, the pair both had impressive Michelin studded & international resumes before making a name for themselves at fine dining restaurants in the city. In 2009 Emanuel met restauranteur & owner Fabio Camardi, and on Easter 2010 the trattoria style restaurant, which used to be an Italian pastry shop, opened its doors. Daniele joined the team in 2015 and together they would continue the restaurant's already five year run to be recommended by the Michelin Guide. Fabio vi aspetta! For more information clicca qui - www.MercatoNYC.com . 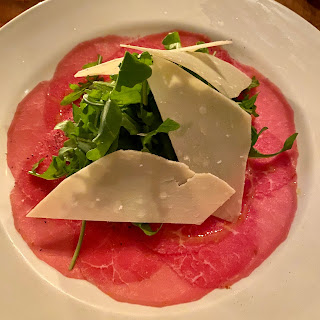 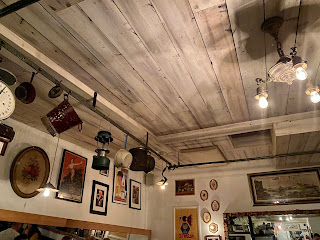 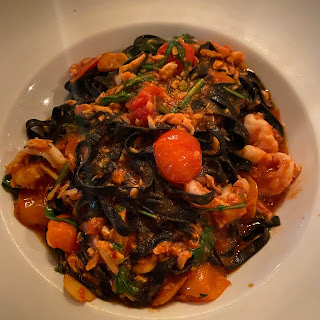 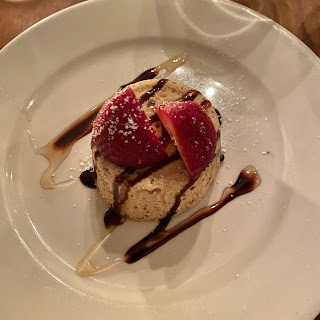 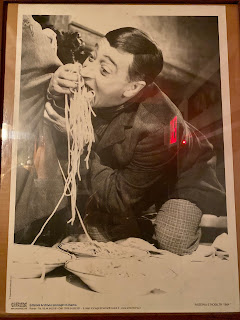 Famous Neapolitan comedian, Toto, in a scene from a 1954 movie

Moment of truth: I'm a sucker for a tiki bar. The campier, the better. From Hale Pele in Portland, OR where a sound track of crashing thunder, light show and smoke machine(for effects) mimic a lightning storm every 30 minutes. To tiki-world famous Mai Kai in Fort Lauderdale, FL with its Molokai sunken ship bar and torch juggling Polynesian stage show, I will travel for tiki. So, what's three blocks - rain or not - to experience The Polynesian.

In the Pod Times Square, a hotel made fashionable for futuristic pod-like lodging, the bamboo and wicker tiki furniture is quite the juxtaposition. Outfitted with a lounge, bar and open air courtyard, The Polynesian offers something for every tiki mood. Order from their extensive, international rum menu or tiki cocktails with food to pair. And remember, what one rum can't do, three rums can! A classic Mai Tai or a flaming Derelict? Decide here -  www.ThePolynesianTiki.com .

After a morning visit to the Met Breur modern & contemporary art museum, I wave to Daniel on the way to lunch. One thing I love about NYC is justifying indulgences with walking everywhere. So, I earned lunch at The Modern, right? Have a look here.

In an attempt to build up some hype and anticipation; dinner Saturday night also gets its own post. I'm talking a heavy hitter, months long reservations list, who's who, name drop worthy Chef like it's a hot potato. Dinner by Chef Thomas Keller was worth a few months wait. Have a peak at 35th floor Central Park views and 9 course dinner at Per Se, here.

Times Square; a phenomena wrapped in an anomaly. Some, visitors & locals alike, love it and others avoid it like the plague (too soon?) "a tourist trap", they scoff. It's like looking at the mechanics of a Swiss watch, you just can't help but be fascinated by it. Hate it or love it, it gives New York City life. Have you ever flown by Manhattan at night? Times Square looks like a heart, pumping light and a vibrant energy down the streets & avenues. The iconic site is constantly flooded with people, home to shops & restaurant, has countless advertising screens and of course a storied history.

Just a stones throw away, Gallagher's steakhouse pre-dates much of that history, and then some. Opening its doors in 1927, it originally operated as a speakeasy bootlegging operation during prohibition. Keeping as much of that history as possible alive, Executive Chef Alan Ashkinave is the only grill master in the city who still fires his steaks over hickory charcoal. With a red carpet to greet guests, all dark wood everything and white table clothes, Gallagher's has a true New York steakhouse feel. Just the way new owner Dean Poll intended it to be when he relaunched the NYC staple in 2014.

It's not often that I'll order a sandwich or a burger at a restaurant, but I did my research and came specifically for this occasion. A well thought out approach is paramount when considering a burger this size. I won't bore you with my tactics, just revel at the beauty bellow. Choose your toppings and more at www.GallaghersNYSteakHouse.com . 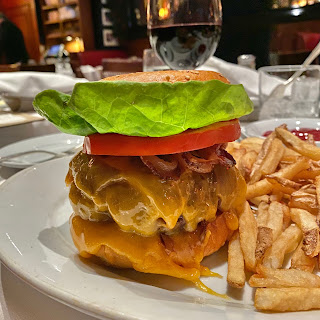 Prime Beef Burger
Only one picture of this high stacked, mouth watering beef bomb doesn't do it justice, so you can drool over it from three angles!
10 oz. of USDA Prime Beef, Caramelized Onions, Vermont Cheddar, Smoked Bacon, hand cut Fries 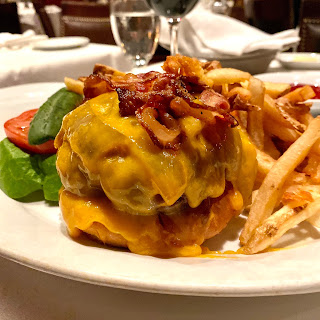 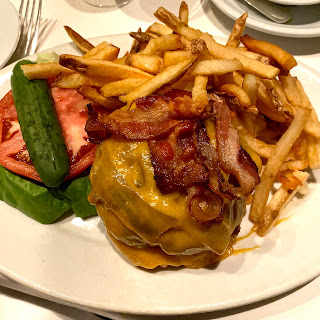 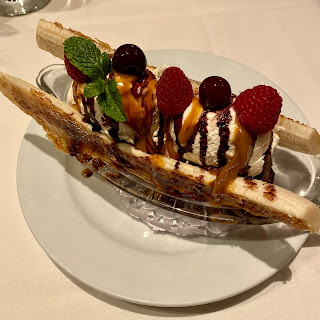 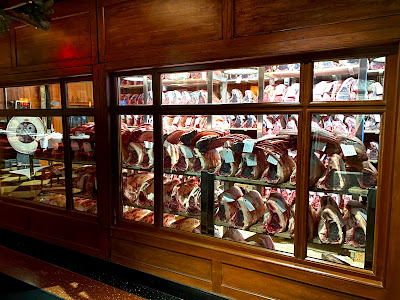 Gallagher's Steakhouse dry aging room, outside and in

No visit to the Big Apple is complete without going back in time, and I was able to check that off my list. New York City has its fair share of swanky cocktail lounges, but The Gold Room (TGR) in the Lotte NY Palace is the epitome of historic Manhattan gilded age opulence. No need to imagine, because it exists; A whole room decorated in gold with gilt ceilings, dating back to the early 1880s, where prominent New Yorker Henry Villard utilized the room as his library. The team was friendly & welcoming, even allowing me access to off limit areas where I was able to gaze upon a grandiose staircase and a regal study on the second floor, normally only accessible for private events. Even my perfectly executed Side Car was by far only the second most captivating part of experiencing a cocktail in TGR. If your curiosity is peeked, I'm certain the team will be happy to let you revere the room for a few minutes. For more information on offerings and its history visit www.LotteNYPalace.com .

It hurt a little to crop this video in order to upload it properly
as every inch of the Gold Room leaves you in awe.

As always, I hope you enjoyed discovering some new spots for your next visit to the big city.

Interested in what the originators of Modern Peruvian cuisine are up to in Lima? Have a look at Astrid y Gastón here.