*Please Note: I want to assure readers that I did not visit New York City during the current COVID19 pandemic, but months before any mention of it. Everyone please be safe and follow rules & guidelines provided by your local officials.

There's an area in New York City that I like to call the Michelin Golden Triangle. Within this golden triangle is the highest concentration of Michelin stars in North America, and after painstaking research I'm confident to proclaim, in the world. Four restaurants, nine Michelin stars, all within 0.1 mile distance of each other, by the South West corner of Central Park at Columbus Circle. Its distinguished honoraries include, Marea 1 star, Jean-Georges 2 stars, Masa 3 stars, and today's feature presentation, Per Se by Chef Thomas Keller, 3 stars.

A weekend dinner reservation at Per Se is one of New York City's rarest tickets, so I was quite elated when the confirmation e-mail came through. Relishing the evening, it's embarrassing to say, I took time out of my day to walk over to the Time Warner building and made my way up the labyrinth of escalators to ensure I knew my way around. Fast forward 6 hours and through the Per Se salon, where an abbreviated tasting menu is offered, and my view from the dining room was Central Park South with the Manhattan skyline outlined in what appeared to be sky scrapers shaped constellations. The space is elegant with a touch of clean, contemporary design aesthetics and understated detail let the view, and of course the cuisine, be the main draw.
If the name Thomas Keller (TK) sounds familiar, that's because Chef falls well within, and at the top of, the culinary celebrity echelon. I first mentioned TK on DTST five years ago when writing about The French Laundry, his other 3 Michelin Star restaurant in Napa Valley, making him the only American born chef to have two 3 Michelin star restaurants. Much like its west coast counterpart, Per Se is also a Relais & Châteaux and Grandes Table du Monde member, and amongst other distinctions ranks 115th on the World's Best Restaurants list.
Opened since 2004, Per Se is Chef Keller's reimagined concept of The French Laundry for the Big City. The nine course tasting menu, along with a vegetarian option, both stay true to classic American cuisine using French inspiration and techniques that TK crafted while living in France in the 80s. Both menus change daily and are created using only the highest quality and freshest ingredients purveyed by farmers & foragers TK has developed a personal relationships with. The attention to detail throughout every aspect of service and the restaurant is only rivaled by the skill found in the kitchen.
Before taking on the Chef de Cuisine role in 2017, Chef Corey Chow (CC) was quite familiar with the TK family, having worked at Per Se in various roles since 2007, with some experience gaining journeys in between. Growing up in a Chinese household, he quickly realized how food and culture went hand in hand with bringing family together. Combined with the influence he gained from working alongside chefs who had previously worked at The French Laundry, CC knew that he wanted to be part of a team who's goal was to maintain the pinnacle of professionalism, perfection and strong work ethic. The two elements of bringing people together through culinary hospitality and excellence epitomized my experience at Per Se, all the way down to a full kitchen tour. In compliance with New York's city-wide ordinance Per Se closed in late March, and is now set to re-open October 15th. Until then, please enjoy an evening at Per Se below. 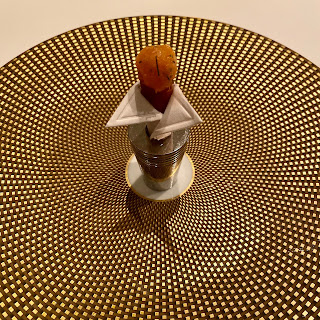 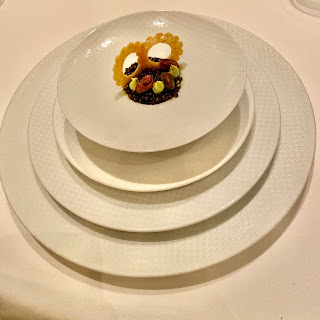 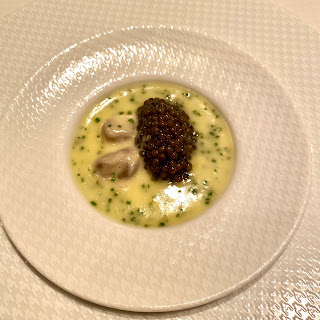 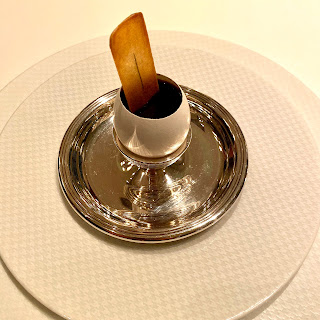 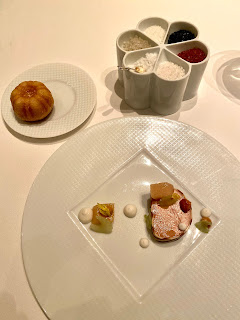 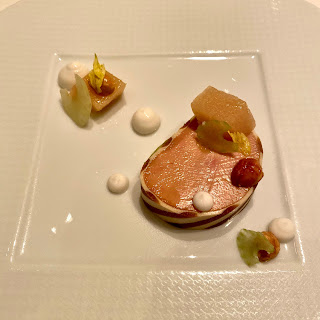 Close up on the Duck Foie Gras 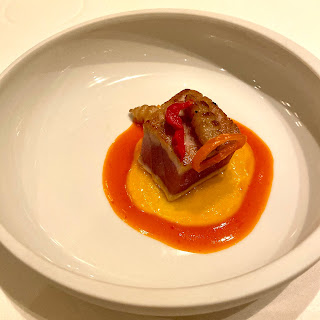 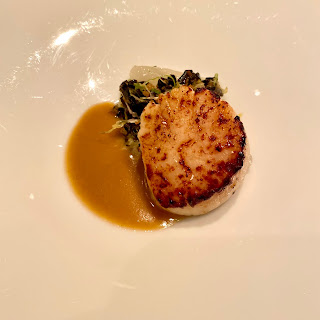 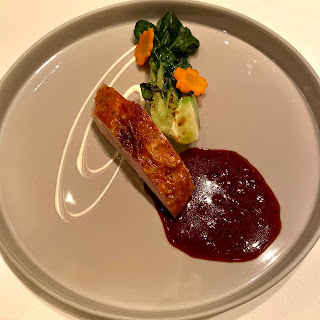 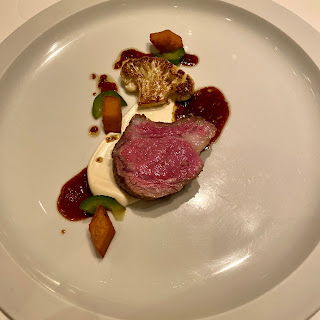 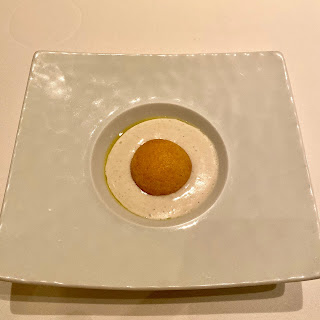 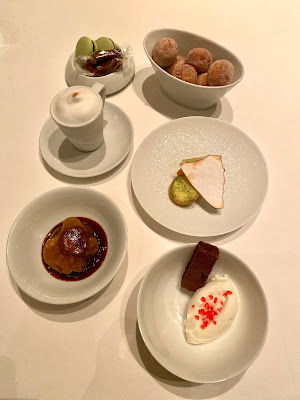 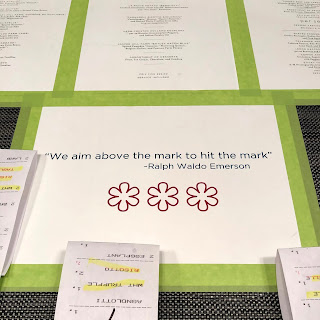 At the pass, motivational quotes change daily for inspiration
and a reminder of Per Se's three Michelin Star standards
The kitchen tour, as immaculate and organized as the dining room, was led by a young man who pointed out that he'd read my blog and mentioned having previously worked at the Ledbury in London, a restaurant I've blogged about, a testament to just how much detail goes into making every guest feel welcomed. For more information on Per Se and Thomas Keller click here.
Taking into consideration that Chef Keller solidified his name in the culinary world through Napa Valley, and still holds a strong presence there with The French Laundry, I can't help but think of the current dire situation in northern California as a result of the destructive wild fires. Communities have been leveled, vineyards decimated and even a restaurant I had the pleasure of Dined There at 5 years ago, The Restaurant at Meadowood, suffered damage beyond repair. Please click the link below to see ways you can help out the people finding themselves in times of need in northern California.
https://www.thecalifornian.com/story/news/2020/08/20/california-fires-how-to-help-river-lake-carmel-wildfires/5618698002/
The Aviary
Later that evening...
A guy walks into a bar and sits at the counter. The bar tender asks, "what'll it be?" Only in this version, the bar is a molecular mixology lab where the preparation of cocktails is ceremonial. The bar counter is a modern lounge with 35th floor views of Central Park South, and the bar tender is none other than Michelin Star Chef Grant Achatz. Well... he's not the one literally mixing your cocktail, but the imaginative pioneers of molecular gastronomy, the Alinea Group, are indeed founders of the Aviary bar concept. Ironic that the Chef who almost lost one of his senses is about to blow all of yours away!
After it's original Chicago location opened to much acclaim in Spring of 2011, the Aviary New York City opened late 2017 in the Asian inspired, contempo-luxurious Mandarin Oriental hotel. I had attempted to get a walk-in spot at the Aviary on previous visits to New York in vain. As I walked away I'd look over my shoulder to see flames sparking and hearing "oohs" & "aahs".  This time, those flames would be sparking at my table! And I'd be doing the "ooh-ing" and "aah-ing"! Located in the same complex as Per Se, the team at the restaurant made me privy to some celebrity-like backdoors and short cuts as the quickest path to the Aviary. Soon enough I was handed a menu with no hint as to which cocktail came with what theatrics. Food is also served, and is just as imaginative, but the focus is definitely cocktails. If a classic Manhattan served in a bag encapsulating aromas of an Everything Bagel is not your thing, perhaps one of the two cocktails below will be. 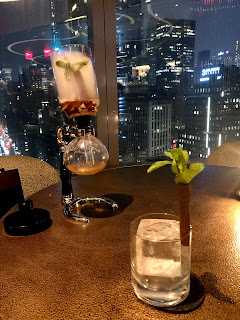 Trouble on the High Seas-
For this cocktail ceremony, a syphon brewer is used to infuse ingredients with the spirit, in this case rum.
The burner heats up the liquid causing a vacuum, and the rum is drawn up into the upper chamber where it's flash infused with the other ingredients.
I originally saw this method for what I believe is the syphon's intended use, espresso service
at Il Palagio restaurant in Florence. 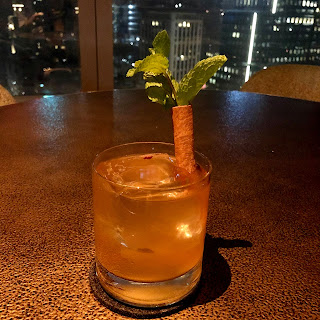 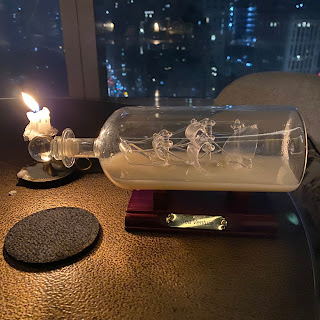 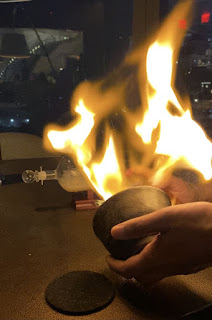 Forgive the quality, this is a screen shot from a video on my phone.
For this performance the mixologist sprays a "mace" through the candle igniting flames into the cup
lining the inside with desired aromas and flavors.
The contents of the bottle are then poured into the glass.
As you can see, this isn't your average gin & tonic, or rum coke spot. Of course, there's nothing wrong with the classics, but if you want to do some "ooh-ing" and "aah-ing" of your own... you'll have to make a pilgrimage to Chicago, as the Aviary New York City has since said good bye to the big apple with no immediate plans of re-opening. For more information on the Aviary Chicago, click here.
From the bustling boroughs of New York City, to the coastal calmness of Florida, see what Daniel Boulud is cooking up in Palm Beach, here.