From the middle of the Sacred Valley, we travel to the heart of the city and the country's capital. In recent years Lima has emerged as one of the best culinary hot spots in the world. "Why,?" you ask? Currently, on The World's 50 Best Restaurants list (WB), Lima holds two spots in the top 10, and on Latin America's 50 Best Restaurants list (LAB) it holds the top two spots; safe to say that it's in the upper echelon of global fine dining cities.

As the cab pulls into Astrid y Gastón's (AG) courtyard, I see the impressive 300+ year old plantation home, which houses the restaurant, and it feels like I've gone back in time. It stands alone, illuminated, proud and impeccably looked after. Surrounded by architecture of a more recent time and bustling Lima on a Saturday night, it's the perfect visual metaphor for modern and classic coming together in harmony, much like the cuisine. The restaurant recently celebrated its 25th anniversary, but it all began in 1994 after Astrid Gutsche and Gastón Acurio graduated culinary school in Paris. Catering to the global trend at the time, their original restaurant menu would have a heavy French influence. As years passed, the duo's cuisine developed to solely showcase local flavors, and today they're highly regarded as being at the originators of modern Peruvian fine dining. In 2013 the couple's eponymous Relais & Chȃteaux restaurant ranked number one on LAB list on its first year of publication. One year later AG would move into its new location, a Peruvian hacienda with as much history as the duo have accolades. Today, AG ranks number 67 on WB list and number 13 on LAB list. The history of their current home, however, predates any lists, dating back to the mid 17th century. Since then, at one point in time or another, this hacienda has been the epicenter of economic, social, cultural and religious activity in the city and for the country.

Whether gazing at the olive tree garden, believed to be planted in 1560, from the comfort of the terrace which showcases the hacienda's original architecture, or sitting in the contemporary Azul Salon with plants hanging upside down on the ceiling, its clear to see AG's passion to showcase Peru's traditions. With a passion not only for tradition, but hospitality as well, on any given evening Astrid can be found mingling with guests and posing for photos (see below). Such dedication landed AG the LAB Art of Hospitality award in 2017. Mentoring and passing the torch onto the next generation of Lima's great chefs, Gaston's young team push creative boundaries with the goal of providing guests the excitement of an unparalleled culinary experience. They definitely met their objectives with the dishes below. 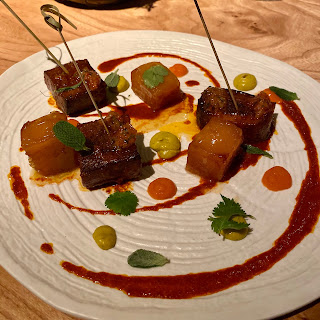 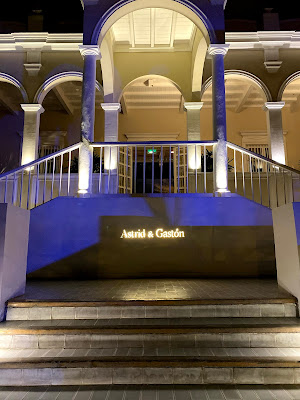 Court yard & entrance of the restaurant and 300 year old *hacienda
*Hacienda is a term used to describe a large estate or plantation with a dwelling on it. 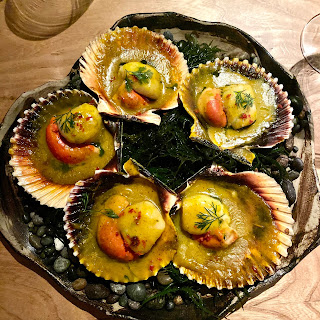 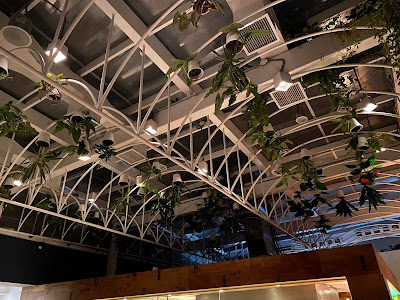 Salon Azul, the dining room where the kitchen serving the à la carte menu is housed.
AG have four other kitchens, each with a particular specialty & purpose; Pastry, tasting menu, production & bakery and El Taller, a kind of gastro-lab where the team develops new ideas. 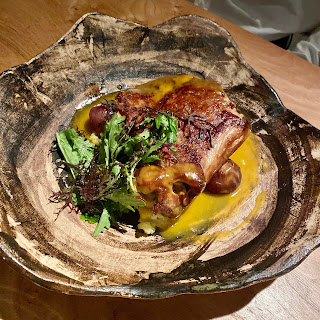 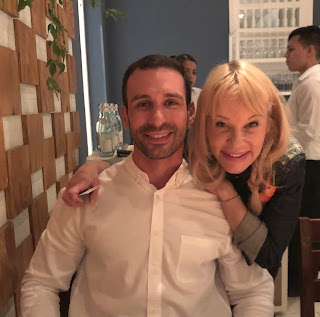 Myself with one half of Astrid y Gastón, Pastry Chef Astrid Gutsche 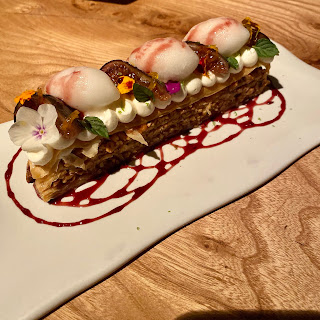 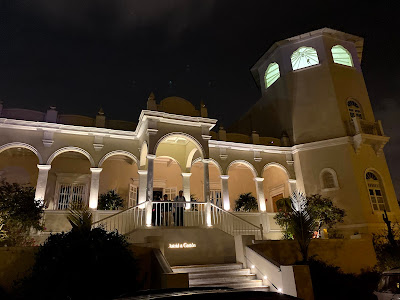 Similarly to Hacienda Moreyra once being the epicenter of Peru's society, AG continue that tradition by preserving their culinary history, telling stories of the country and its regions through gastronomy. As Peru's gastronomic ambassador, Chef Gastón's dedication goes beyond the restaurant, and he's played a key role in opening the country's first culinary university in 2018. I did not know what to expect traveling to Ecuador and Peru, but if I had only one takeaway it's the warmth of the people and the pride they take in their culture - and delicious cuisine! For more information visit www.AstridyGaston.com .

Peruvian cuisine & delicacies range from street side roasted guinea pig to Relais & Chȃteaux properties. See a preview of both here on Dined There, Sipped That blog!