To the culinary world, Alinea restaurant in Chicago is synonymous with not only pushing boundaries of modern & experimental cuisine, but creating new ones and setting the bar very high. Using equipment never before seen in kitchens, the team at Alinea are re-imagining fine dinning, offering an experience that is truly unique and comparable to a select few restaurants in the world. From my own experiences I would only compare Alinea to Tickets in Barcelona, and even still, worlds apart. One of the differences being that Tickets delivers the show to your table, where Alinea creates the show at your table. To quote the Michelin guide "...the cooking is elevated to an art form." Alinea holds the coveted three Michelin Star rating, which it has kept since 2011, and held the 21st spot on the World's 50 Best Restaurants list at the time I "Dined There, Sipped That."

The man behind it all is Chef-owner Grant Achatz, and as highly as he is regarded as a visionary in the culinary world, his story is considered a remarkable one in the medical world. After working in his parent's diner as a child, Grant graduated from culinary school when he was 21 and soon found his mentor in Thomas Keller at the French Laundry where he rose to Chef de cuisine throughout his five year tenure. Chef's time at Trio restaurant was the catalyst to his creativity and desire to innovate. In 2004, with partner Niko Kokonas, they began building their dream, Alinea. After a period of outstanding success at Alinea, Grant was diagnosed with stage IV cancer of the tongue in 2008 with discouraging odds of survival, even considering the suggested treatment of amputation and chemotherapy. Alternatively, he opted for a different protocol offered to him by the University of Chicago, and after arduous therapy he has shown no signs of the disease since 2009. How fitting that a man who is untraditional in his work, chose the untraditional route which would ultimately save his life.

Just north of downtown Chicago, Alinea first opened 14 years ago, May 2005, and went through a full renovation in the first half of 2016. The result is a minimalistic modern decor with understated art and architectural nods at various historical periods. Off white walls with calm earth tones and smooth lines, the statement is made by the dishes. Alinea is made up of two stories and three dinning areas for three distinct experiences. The glassed-in Kitchen Table shares a wall with the open concept kitchen, The Gallery on the first floor seats only 16 and serves a 16-18 course menu, and on the second floor The Salon offers 10 to 14 courses in one of three dinning rooms. Not to give every detail away, I will disclose that each experience, along with being more exclusive than the last, transports diners on an immersive, multi sensory journey for both mind and body. As you've gathered by now, Alinea doesn't serve a meal, it's a spectacle, fitting for the aptly named Salon dinning room where I experience. To quote The World's 50 Best list "Alinea has kept itself at the forefront of modern creativity via artistic modernist cuisine built from the world's best luxury ingredients." Not too shabby.

Much like acts in a performance, or chapters in a book, each service has a name (see bold lettering below). Every dish evokes emotions and or memories for Chef and his team linked to an adventure, a memory, place, time of year, etc. For example Ink, Crunch and Paper are all seafood focused, drawn from travels throughout Asia. Ranina Ranina recalls an experiment where every ingredient in the pantry was used in an attempt to develop a curry. And Nostalgia drawing from a time in our past that is familiar. Purists make way, or prepare to be blown away, you never seen anything quite like this. 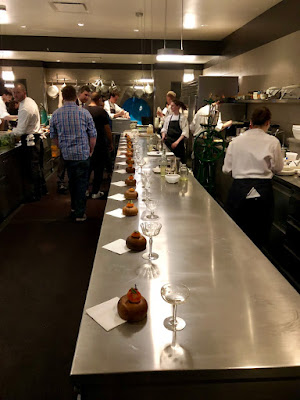 Following the first course guests in the dinning room were instructed to stand & follow and led to Alinea's kitchen for a bite & cocktail. 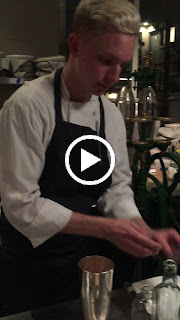 This imperial cocktail shaker is built in Australia from a design patent dating to 1803. None of the original models exist, but Jason Crawley recently discovered the patent, applied for it and has put the shaker back into production. 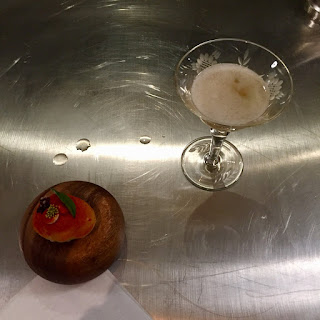 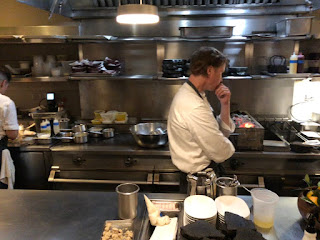 Cheff Grant Achatz on an *Alinea
*A new train of thought 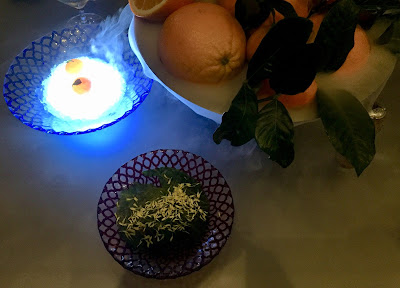 Setting the scene:
Upon arrival this large bowl of oranges was on the table. For this course a concoction of hot water and citrus oil aroma was poured into the bowl containing dry ice creating a smoke flow over the table as you can see above. 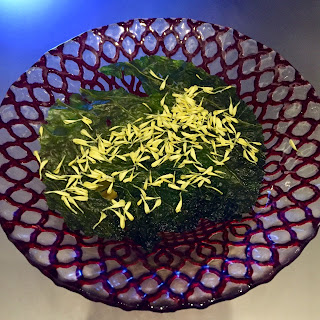 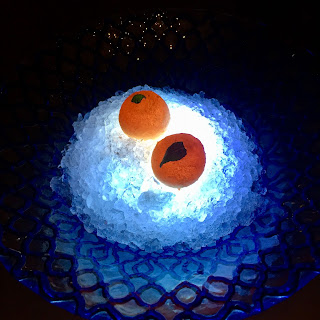 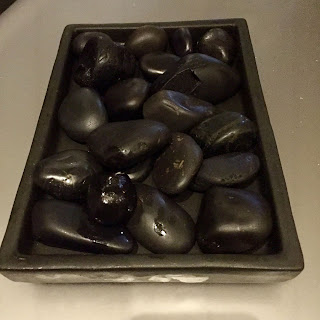 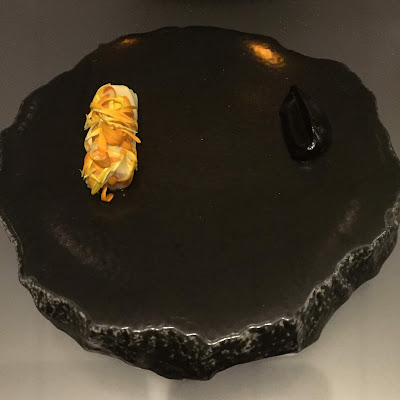 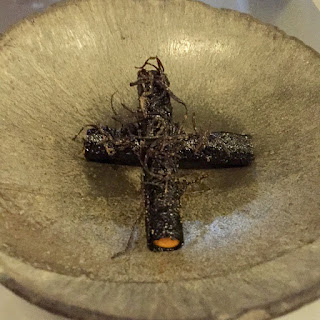 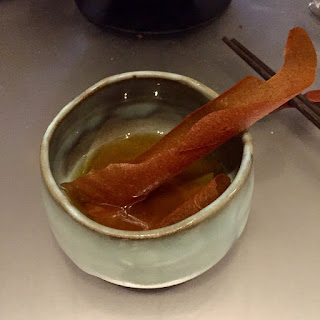 Setting the Scene:
The paper in the description is in regards to the thin crisp seen in the photo above. This "paper" is in fact made of puréed langoustine tail and red pepper, then rolled paper thin and dehydrated to resemble a thin sheet of paper. The Bouillabaisse refers to broth which is poured over the dish table side which rehydrates the sheet noodle. 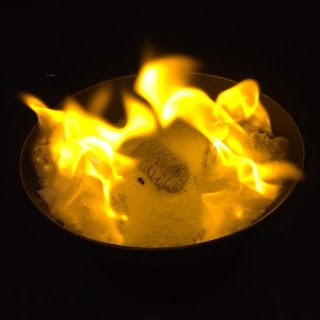 Setting The Scene
Without instruction, a large cast iron vessel of what looks like salt is brought to the table. Moments later the binchotan charcoal is set on fire table side and removed with a smile, but no further explanation. Later in the meal the vessel is returned to the table, flameless, but still warm and smoking. The Perfume course below is then served atop the smoking vessel (see that explanation below). After the Perfume course is completed and removed, low & behold, a potato is retrieved from the bottom of the bowl (I didn't take a photo of the potato).

What's going on here?
The potato was already inside the salt when it was set on fire and the technique is called salt roasting. Salt is a poor conductor of heat which allows the potato to roast low and slow, forming a crust. The crust creates an oven inside an oven effect, resulting in the potato, or any ingredient, to roast in its own juices. 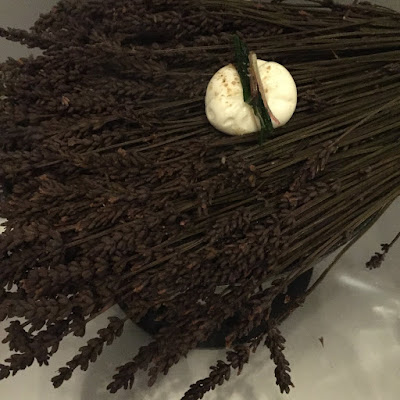 Setting the Scene:
These lavender stocks have been soaking in water for an extended period of time. When they are placed above the smoking vessel described above they do not burn, rather a pleasant aroma of lavender is emited into the air. 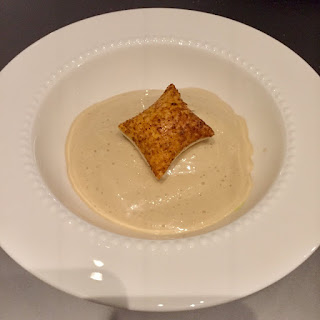 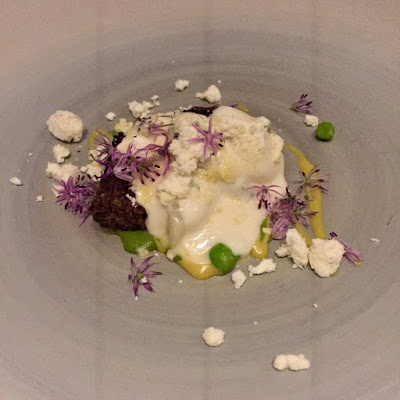 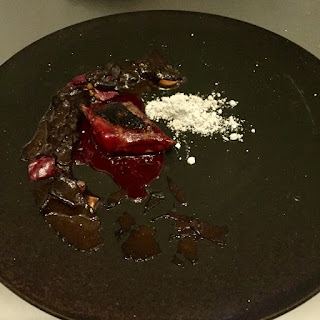 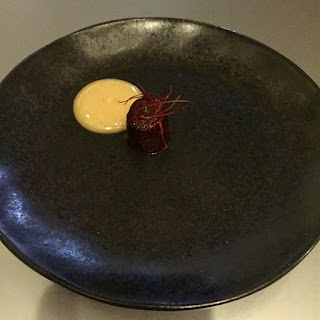 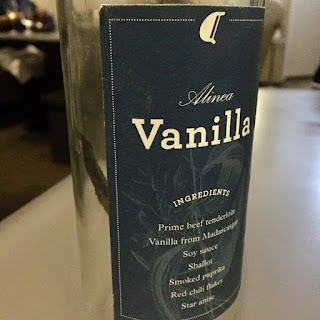 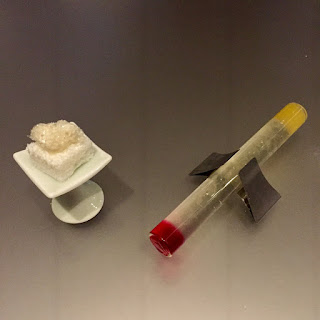 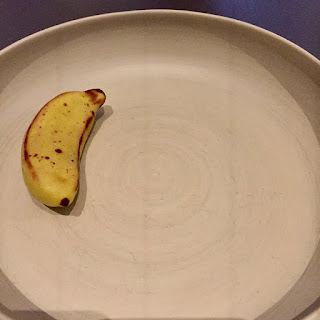 What's going on here?
This is actually hand painted ice cream made to resemble a ripened miniature Banana. Inside there are flavors of banana, peanuts and chocolate. *Luxardo Maraschino cherries distilled using a rotary evaporator as the "cherry on top" to complete Alinea's take on a banana split. 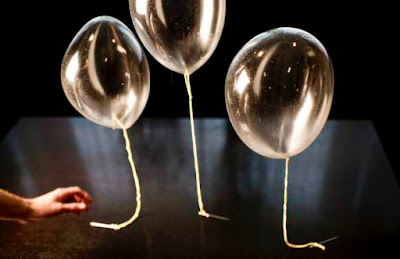 Have you ever imagined being able to instantly infuse gin into a cucumber slice by removing all the air in a small chamber, forcing the gin into the cucumber? How about removing all the moisture from birthday cake, collecting that moisture and serving the birthday cake liquid in a glass, as a drink? Not only is Alinea achieving such mind boggling experimental gastronomic feats, they had to think of the idea before putting it into fruition, and that's what truly impresses me.

Alinea continues to push themselves and their guests to rethink what dinning can be. Artichoke purée that looks like a stone, beef jerky that looks like vanilla bean, you get the idea and what a refreshing, open minded way of visualizing things. Artistry and fantasy is a must, however Chef Achatz also believes that creativity is the result of hard work and study. For more information on Alinea and their other ventures visit www.AlineaRestaurant.com .

Ingredients from California to New Brunswick and Spain to Japan, at a restaurant in Chicago. Voted Best New Restaurant and Best New Chef in the city in 2017, welcome to Oriole.