May 2021
Ocean Drive, The Versace Mansion, South Beach; just a few quintessential references of the 1950s glamor era which gave one of the world's most vibrant cities global notoriety - Welcome to Miami! Fast forward to today and Chef Thomas Keller is making history of his own in Magic City by opening his first Florida restaurant in what once was the original Surf Club. Chances are that the elite Chef and restauranteur sound familiar as I've blogged about his other establishments French Laundry and Per Se, and the Surf Club Restaurant plays no second, or third, fiddle.
The original Surf Club first welcomed Miami's whos who on New Year's Eve of 1930 as a social & beach club. Luminaries the likes of Frank Sinatra, Winston Churchill and John F. Kennedy strolled the same halls as guests of the Four Seasons hotel do today. The impressive project now includes hotel rooms and privately owned residences, all built around the original club. The design melds a bygone era of "proper impropriety" with the modern luxuries known to be offered by the Four Seasons hotel. The undertaking kept the club a priority, not modifying any of its original architecture and finishes, from coral railings (now illegal) to terra cotta floor tiles and roof shingles. Coastal elegance at its best, the club afforded its distinguished members somewhere they could feel safe, with a beach and a ballroom, behind closed doors. I got quite the nostalgic kick looking through old menus, when you could get a bottle of 1928 Krug Champagne for 9.00$!
Writing his own chapter in the Surf Club book, Chef Thomas Keller opened the Surf Club Restaurant July 2018 with much excitement. The restaurant pays homage to the location's grand history with a classic continental menu grounded in European cuisine such as Lobster Thermidor and Short Rib Wellington. The Chef working hard behind the scenes, meticulously maintaining the Surf Club Restaurant and Chef Keller standards is Manuel Echeverri. Born in Colombia, Echeverri graduated from the Cordon Bleu College in Miami and sharpened his skills under notable Chefs such as Julian Baker and José Andrés before joining team Keller.
It's a pleasure simply being in the dining room as the restaurant's ambiance is truly unique and quite honestly difficult to describe, I'm certain the Rat Pack would approve. Well appointed sea-foam blue velour bench seating, ornate woodwork on the walls and archways, and a tromp l'oeil ocean mural paying homage to the one that was in the original dining room, all coming together perfectly. A bar & lounge, main dining room, and since reopening after closing due to Covid, an outdoor courtyard area, each elegant and comfortable spaces. I often use the metaphor of being transported back in time, but that's the genuine feeling evoked. As the nostalgia wore off I noticed a tall man pushing the table-side Cesar Salad cart, and even with his mask on I immediately recognized Chef Keller. It hadn't dawned on me that it was currently Miami Food & Wine Festival and that perhaps a celebrity sighting would be expected. Humble and down to earth, we chit chatted long enough to mention a friend in common, my experience at his other restaurants and a quick photo opp for the gram, then off he went to thank other tables in the dining room for their support. I've storied about Chef Keller and his teams numerous & impressive accolades and accomplishments on previous posts where you're welcome to refresh your memory (see the links at the bottom of this post). The new Surf Club and Surf Club Restaurant have since adorned a myriad of magazine features including Forbes, Conde Nast Traveler and Vanity Fair. Over the years I've enjoyed the Surf Club Restaurant before, during and "post" pandemic; always stellar service, cuisine and experience. Unfortunately the 9$ Krug is no longer available, but the meals were spectacular despite.
February 2022 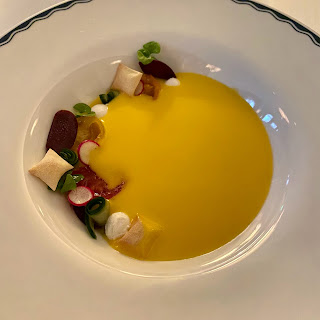 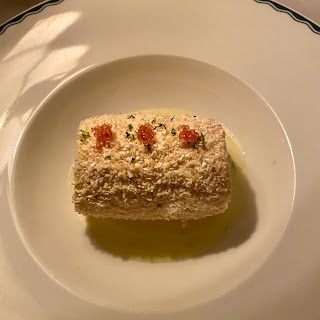 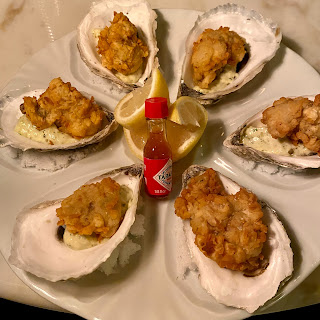 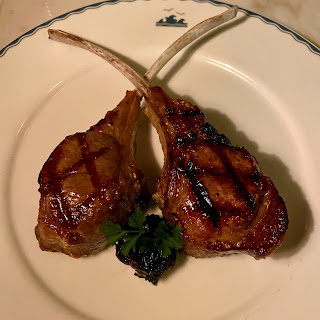 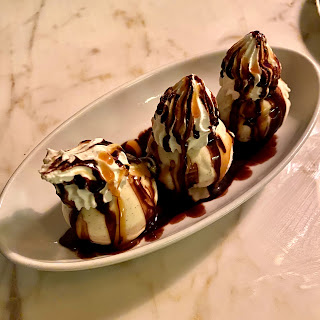 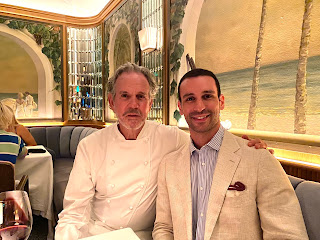 Chef Thomas Keller and myself in the Club Room dining room 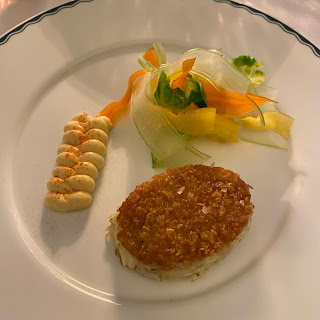 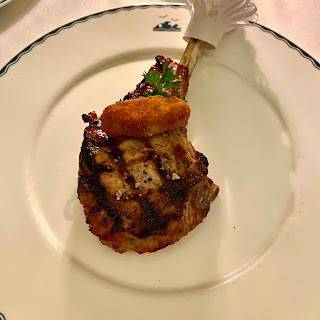 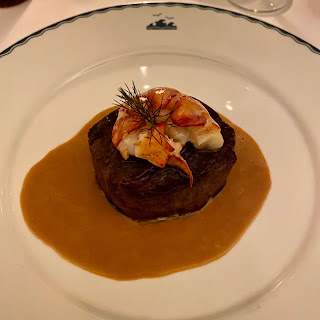 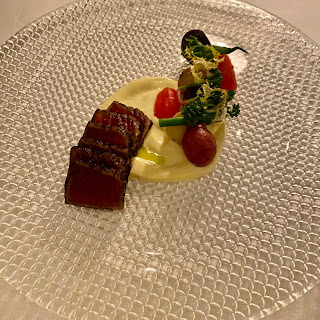 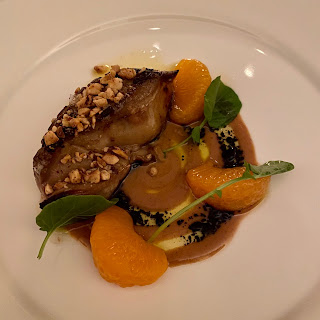 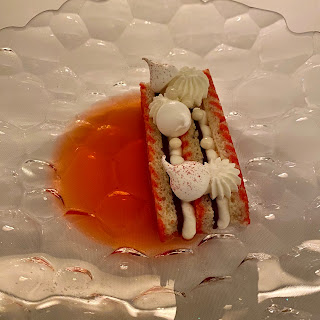 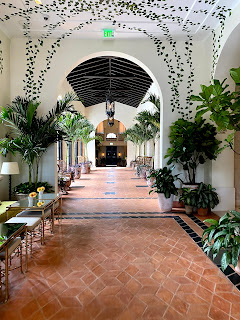 The Four Seasons at The Surf Club lobby 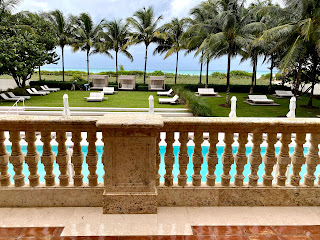 The Four Seasons at The Surf Club terrace
November 2020 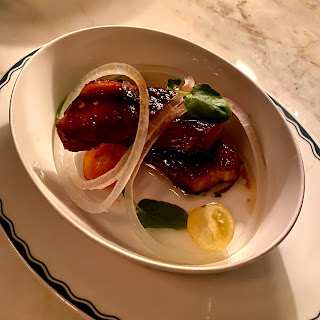 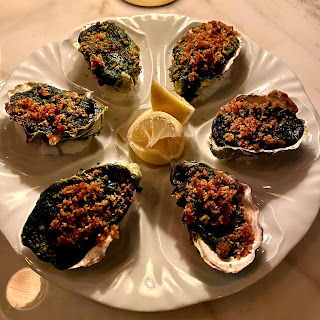 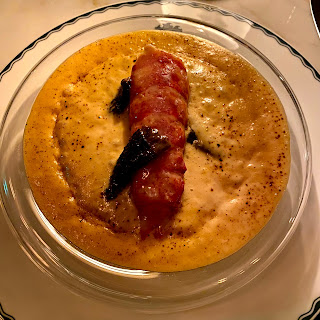 Maine Lobster Thermidor
An important part of what makes a dining experience good versus exceptional is not only the service and the cuisine, but also the feelings experienced and the memories you keep and take with you, long after the dishes have been cleared from the table. Several restaurants I've blogged about had outstanding service and cuisine, but I didn't feel as though I was taking anything home with me, nor did they illicit excitement or passion to share my experience with others. The team at the Surf Club Restaurant makes you part of the family and the story, from the hostess welcoming you back, to the manager, Andrew Newlin, recognizing you even 6 months later, and of course Chef Keller making an appearance as the extra cherry on the homemade sundae. I'll leave you with a quote about the history of the club "...the Surf Club was a gorgeous parade of lost evenings, that makes you ache with longing for a time when people dressed for dinner, smoked and drank heedlessly, and never broke their aesthetic stride in their pursuit of a good time." For more information on the Surf Club Restaurant visit www.SurfClubRestaurant.com .
For more information and my experiences at some of Chef Thomas Keller's other restaurants, see the links below;
Per Se, New York City  ••• French Laundry, Yountville, California