Dining at Sushi Ginza Onodera (SGO) in Midtown Manhattan is the tale of a sushi sanctuary surrounded by the hustle & bustle of New York City. Across from the famous Bryant Park and the iconic New York Public Library the restaurant's location on 5th Avenue is quite fitting as Midtown and Ginza (a district of Tokyo) have much in common. Guests first enter into a shoji wall-like cube built entirely of light wood. Once reservations are confirmed diners are welcomed into the main dining room where the highlight is a 16 seat "L" shaped cypress sushi counter. The restaurant's other half only holds an additional 16 guests at four tables of four and features traditional Japanese understated decor with light tile & wood work and black granite flooring.

While doing my research I learned that Ginza Onodera is a hospitality group headquartered in Tokyo which operates restaurants in seven cities around the world, hence their motto "From Ginza to the world." Opened since fall 2015 under executive Chef Akifumi Sakagami, their Manhattan venue boasts two Michelin stars, and similarly to other restaurants in New York City they operate with a no tipping policy (see The Modern). Japanese culture suggests that hosting is reason enough to provide a high level of hospitality, and a high level of hospitality SGO delivers. The ratio is one sushi Chef to every four guests, and while some are buried in their phones, or on a business lunch, this blogger was eager & intrigued to observe Chef's craft as this was only my second time at a sushi counter of this level. Each piece of nigiri is prepared as per the best technique for that fish and served one at a time, then the dish is wiped before the next offering. I don't do well with options, so ordering sushi rolls is not my forte, but during SGO's lunch service diners simply chose how many pieces they'd like to enjoy from the edomae omakase, and leave the work to Chef. The meal progresses from light to bolder flavors married to rice from Niigata, seasoned with one of two types of vinegar depending on the fish variety. For the typical on-the-go New Yorker who's short on time or wants to upgrade their office lunch game, SGO offers a *futomaki take away option only available with advance notice (*Futomaki is a traditional large sushi roll otherwise not offered on the menu).

In my previous posts on sushi restaurants I wrote about lengthy training which sushi chefs go through (see Azabu), along with some history about the cuisine (see Taku). For this post I'd like to share a piece of history that the three restaurants had in common, being that they all used to source their fish from Tsukiji fish market (TFM) in Japan. "Used to" because after much controversy the old market has made way for its modern successor, the Toyosu fish market. For over over 80 years the famous TFM was the largest in the world and I had the chance to visit it in 2018 before the interior market would close & move. The aging facility raised sanitary & safety concerns, and it even became unfortunately common for tourists to take photos with the enormous tuna interrupting the famous 5AM live auctions. Critics conspired that the market was being moved from the valuable land for construction of luxury condos and complained that rent in the new location would be much higher for smaller spaces. After the new site was declared safe following a cleanup initiative in 2017, the move officially took place between October 6 - 11, 2018. Soon after closing it was announced that the former site of the interior market would be turned into - of all things -  a parking lot for the 2020 Olympics. Today the outer market and restaurants still remain at the TFM site and wholesale operations take place at Toyosu. The new facility offers designated tuna auction viewing areas behind glass and elevated walkways so tourists don't interfere with daily business. Granted that Toyosu is a more productive and better, modern facility, there's something to be said for the old way of doing things and the allure & mystic of an 83 year old market. As it relates to diners, how ever, the 3.3KM between the two markets don't make a difference in the quality and deliciousness of the fresh fish enjoyed below. 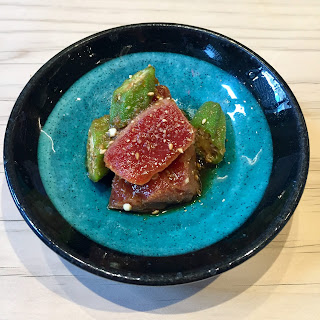 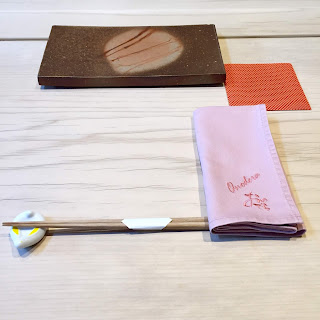 One of 16 place settings at the "L" shaped cypress counter 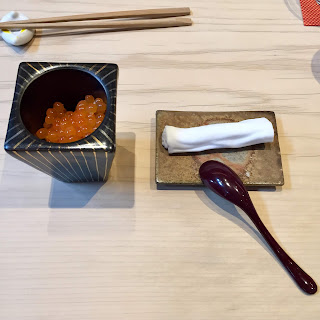 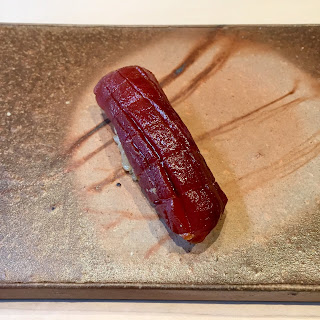 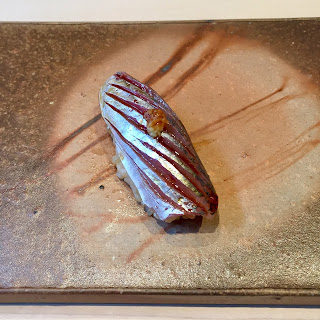 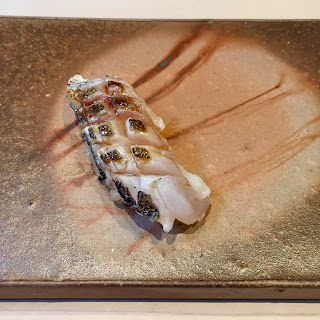 Sushi Chef preparing the next course of lunch service 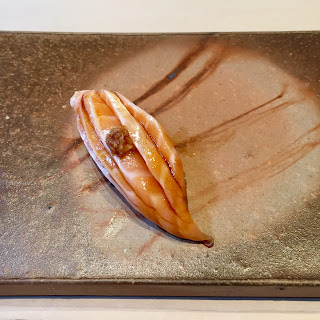 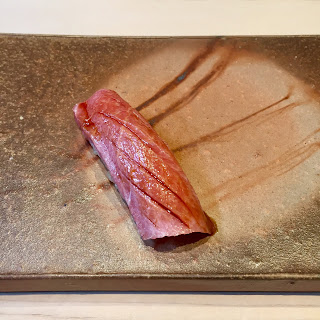 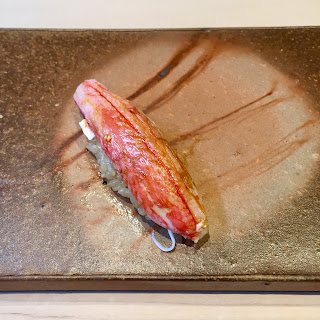 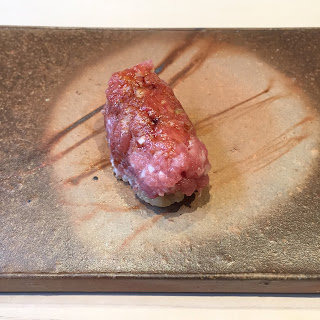 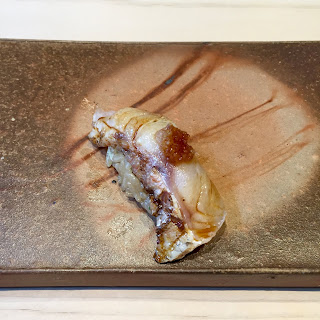 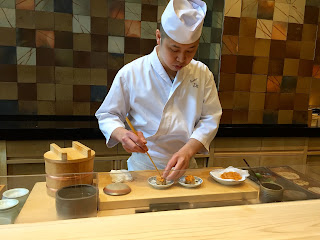 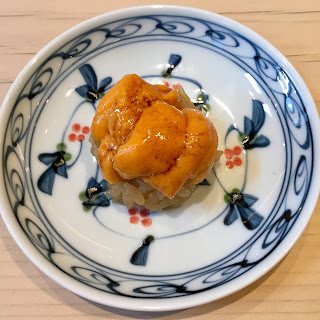 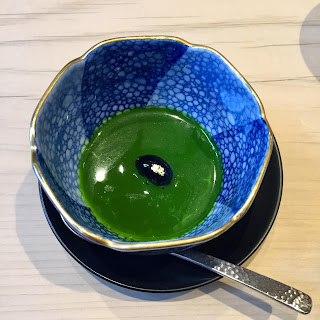 
One factor that stood out during my meal at SGO was the varieties of fish offered. I had never enjoyed or even seen Barracuda and Trout on a sushi menu, just to name a few, and refrained from including photos of more common selections like salmon and scallop. It's worth mentioning the difference between the lunch service I enjoyed where guests can select 10, 13 or 15 pieces of nigiri, versus dinner which differs in dish offerings and escalates quickly in price. Perhaps by now your craving for sushi has also escalated and I hoped you enjoyed this post. For more information on Sushi Ginza Onodera please visit www.SushiGinzaOnoderaNewYork.com .

"From Ginza to the world", or from Manhattan to Brooklyn & world's apart in cuisine. Have a look at one of the most beautiful restaurants in America, the River Café, here.