It's a great coincidence that although the next two restaurants I was going to blog about are half way across the world from each other, they still serve the same cuisine. I decided to feature both in the same piece so I could provide history and interesting insights to everything tempura in one post. The restaurants I have the pleasure of shinning a spotlight on today are Tempura Matsui in New York City and 11,100 km away Tempura Mizuki in Kyoto, Japan. It's also a great way to introduce my next series of posts where I'll be writing about my dinning experiences throughout Kyoto and Tokyo, Japan.

Walk through the white curtains decorated with Japanese script and you'll be transported from the concrete jungle to a zen bamboo cabin. It is here that Chef Matsui is in his element, serving his perfected method of tempura cuisine. The skill and balance required is to assure that the light layer of tempura batter does not over power the fresh ingredients, but be strong enough to not crumble. Each tempura Chef creates their own blend, and Tempura Matsui's airy yet crisp crunch is the result of a combination of sesame and cotton seed oils, refreshed regularly of course. This expertise has earned Tempura Matsui one Michelin star since 2016.

Many people, this diner included, used to think that tempura eats were limited to vegetables and shrimp appetizers or in westernized sushi rolls...until now. In reality, tempura is a cuisine in its own right, and in Japan as well as New York, there are restaurants dedicated to the 16th century-old dish. Quick history lesson: The culinary world can thank Portuguese missionaries for introducing flour and eggs as a batter to the Nagasaki region of Japan in the late 16th century. These combined ingredients resulted in a fritter type concoction which lead to the evolution of the new cooking technique from simply frying in rice flour. Seeing as these basic ingredients were thought to be "commoner's" food, the upper class in Japan only began enjoying tempura cuisine in the 19th Century.


As I present both restaurants keep in mind that my meal at Tempura Matsui was from a limited set lunch menu, and any fine tempura establishment in New York will have the same menu offerings as any restaurant in Japan, short of local fish and fresh seasonal ingredients. Without any further history or painstaking detail, please enjoy my tempura lunch below and be sure to keep reading for my feature on Tempura Mizuki in Kyoto, in the second part of this piece. 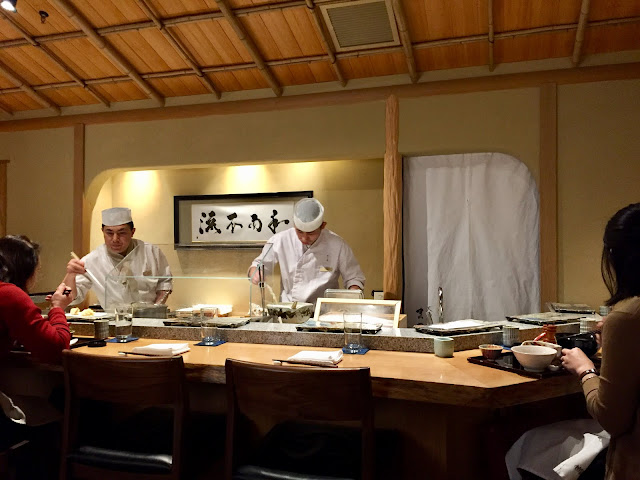 Sous-Chefs at the tempura counter 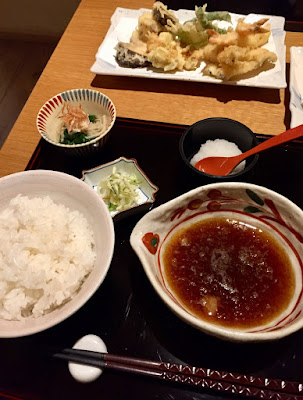 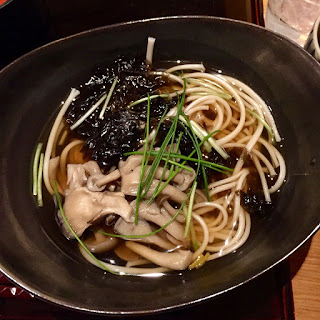 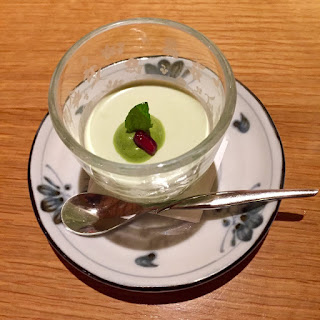 
Welcome to my first visit, and Dinned There, Sipped That post, in Japan. It goes without saying that Japan's culinary scene has virtually no boundaries, and a prehistoric cultural timeline to add. Tepanyaki, hibachi, noodles, sumibi, of course sushi & tempura, there's a plethora of cooking styles and preparation methods in Japanese cuisine. One thing in common with that all Japanese cuisines is simplicity. There are no fireworks, no lounge music, no model-looking staff or overly worked interiors. Authentic Japanese cuisine first and foremost lets the food be the star of the show, to perform on your plate and sing to your tastebuds.

One of the realities of eating in Japan is that...you're in Japan. It's a humbling moment when you look at the menu of your first meal and realize there is very little English. Just enough to get by, but with room to wonder what you're getting yourself into. To be more specific, if you're at a random restaurant there may be no English whatsoever, menu nor speakers. If the restaurant has garnered international acclaim or is in a Western hotel then you're more than likely to have some English speaking and an English menu.

Luckily, you've sat where the action is at the counter of Tempura Mizuki and the Chef speaks just enough English to name each ingredient and help with a tad more detail than the menu provides. Sitting at the counter also provides a genuine experience. In this case the Chef takes the time to explain each ingredient as its being served and which of the four salts and sauces to pair with. Tempura Mizuki is the tempura counter of Mizuki, a one Michelin star Japanese restaurant in the Ritz Carlton Kyoto, hence the English conveniences. The 8 seat counter is a side section of the restaurant which is submerged below ground level, looking out at a rocky facade, but leave it to the Japanese to make it look beautiful. Alternatively to Tempura Matsui in NYC, the Chef at Mizuki uses Safflower oil to lightly batter mainly local vegetables and seafood from Setouchi, a coastal city 2 hours South West of Kyoto. The tempura tasting menu below was a dinner and thus more elaborate than the lunch in New York. In an attempt to hold your interest I omitted photos of tempura edamame, lotus root, abalone mushroom, asparagus and sweet potato. I hope you enjoy the items I did chose to highlight from dinner at Tempura Mizuki below.

Mizuki Restaurant interior facing away from the tempura counter - Source 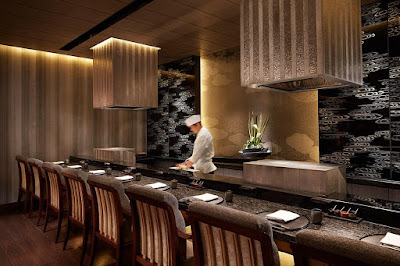 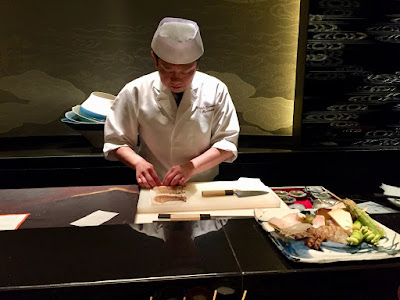 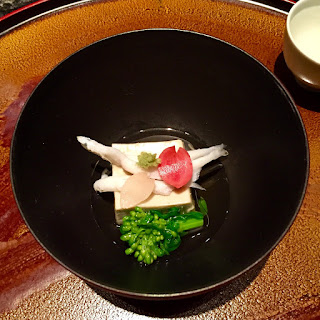 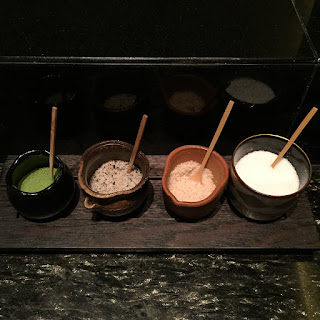 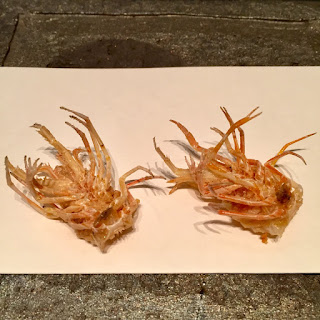 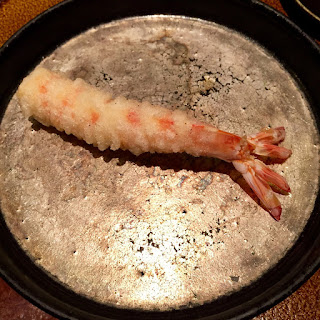 Prawn - Notice how light the batter is, you can almost see through it 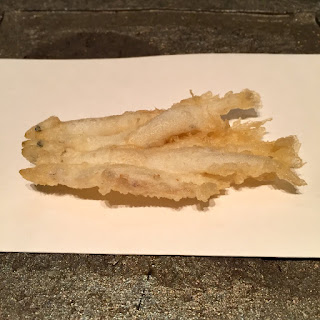 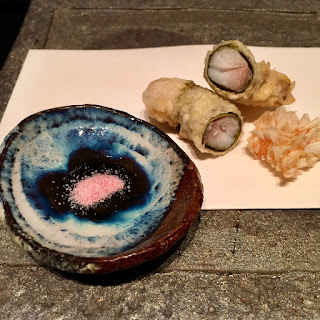 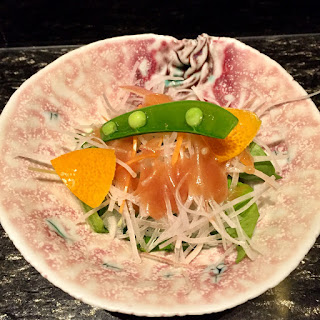 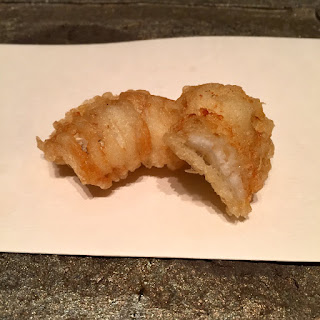 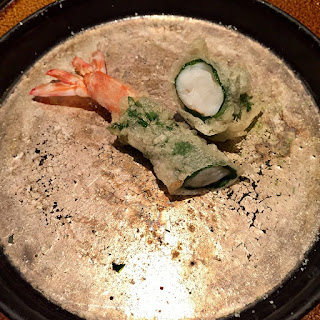 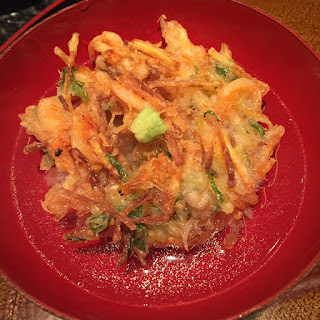 Tenpura Bowl*¹ - Rice Topped with Kakiage*², Kombu & Bonito Broth, Japanese Pickles
For this dish the bowl is served with warm rice, then topped with kakiage and a final step of broth poured over the rice and Kakiage.
*¹Tenpura is an alternate spelling when served over a broth.
*²Kakiage is a fried vegetable & shrimp fritter. 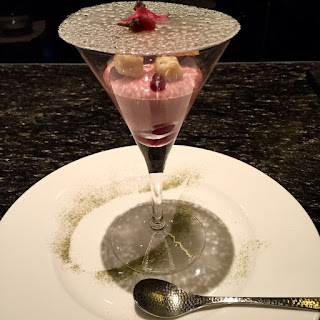 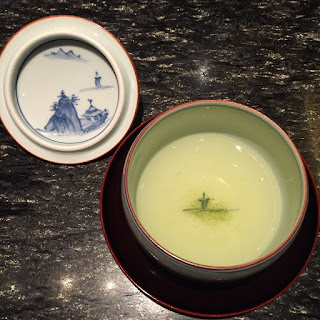 Some 460 years after those Portuguese missionaries introduced new a method to the Japanese, diners around the world are still enjoying this fried golden delicacy. I hope you'll remember some of this history the next time you're enjoying your favorite fish or fresh green à la tempura, and draw comparisons to Tempura Matsui in New York City, and Tempura Mizuki in Kyoto, Japan.
For more information on Mizuki and its Tempura Counter please visit their website here.

Coincidentally vegetables are also the focus in vegetarian cuisine. Check out Nix in New York City, a one Michelin Star restaurant  leaving the question "Where's the Beef?" back in the 80s.