So, there I was, standing in disbelief. Looking up at two different "Joël Robuchon" restaurant signs, side by side, both in the MGM hotel Las Vegas. My shaking head would soon meet the palm of my hand as the suspicion that I had made reservations for the wrong restaurant slowly began creeping in. A reluctant scroll through my inbox's "reservations" folder would confirm that I was indeed due at "L'atelier (workshop) de Joël Robuchon" and not my intended reservation, the legendary Chef's eponymous three Michelin Star venue next door. (To be perfectly clear, "L'atelier de Joël Robuchon" and "Joël Robuchon" are two different restaurants). In my defense, at the time, perhaps due to covid closings, a Google Maps search only pulled up one Las Vegas location with a reservation link to, in my case, the wrong J.R. restaurant. With a sigh of hope and a deep breath of optimism I tried my luck, but was whisked away from the fully-booked dining room to L'atelier where I rightfully belonged.
Regardless of which door would welcome me, I knew the evening would be memorable and first class as Joël Robuchon was a culinary icon. Often referred to as "The God Father of Michelin", the acclaimed French cuisinier amassed 32 stars throughout his career, the most of any chef in history. Sadly, Joël Robuchon passed away at the age of 73 in August 2018 after a battle with cancer. However, his passion and commitment to culinary excellence lives on through the cooking institute he founded near his hometown in France, and his multiple concept, namesake restaurants spanning the globe in ten countries and four continents. Robuchon keeps on giving posthumously through the many Chefs he's taught and mentored, including Gordon Ramsay - who was the only student he ever threw a plate at.
Like many chefs, Joël Robuchon's cooking influence came at a young age. He started his first apprenticeship in a kitchen at the age of 15 after working alongside nuns, following his original plan of being a priest. At the age of 36 he opened his first restaurant which earned one Michelin Star its first year and would catapult his successful career. Less than a decade later he would go on to be named "Chef of the Century" by Gault & Millau, a primarily European restaurant guide which also had a presence in Montreal for a few years. After reaching every pinnacle possible for a chef, Robuchon shocked the culinary world when he retired at age 51 to spend time with his family and travel the world. His experiences from these travels, especially Asia & Japan, would be his inspiration to return to the kitchen to create a new, more accessible restaurant concept, L'atelier. The Japanese style dining counter for European cuisine can now be found in nine locations around the world including Geneva, Hong Kong, at one point Montreal, and of course, Las Vegas.
In line with the Asian theme, L'atelier restaurants decor are red & black with clean lines and an understated elegant aesthetic. Emphasis is placed on the long sushi restaurant-like counter. The counter at the Las Vegas location has more seating than there is at dining tables and showcases close & unobstructed views of the open concept kitchen. The not so behind the scenes chef is Hawaiian native Tayden Poha-Ellamar, who followed his father's footsteps and flourished in the 5 star Las Vegas resort scene at Aria and the Bellagio before joining the Robuchon team in 2015. L'atelier de Joël Robuchon Las Vegas holds one Michelin Star and Chef Tayden carries on Robuchon's legacy by preparing French cuisine, of course, believing less ingredients are more, keeping dishes healthy and simple.
The gaffe would turn out to be a blessing in disguise as I would find out later that evening that the Chef's flagship restaurant next door serves an extravagant 13 course tasting menu! A feast I would not back down from, but one that I was neither aware of, nor prepared for. Instead, the tasting menu at L'atelier Joël Robuchon was a manageable six courses. I hope you enjoy! 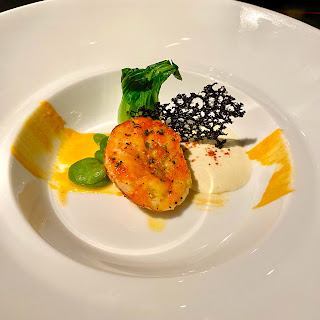 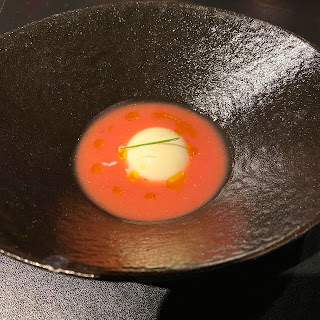 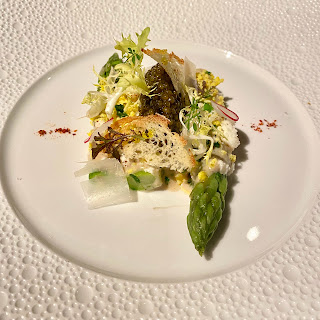 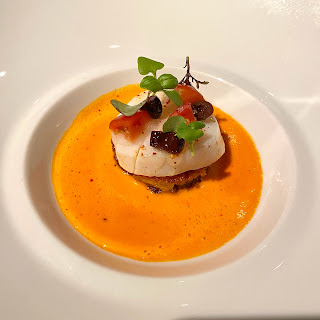 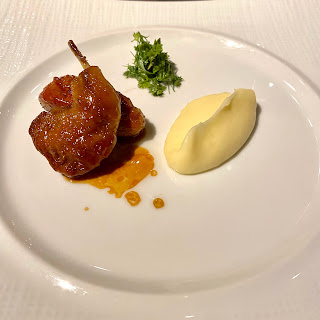 Le Café - Coffee Panna Cotta, Hibikki Whiskey Ice Cream, Caramelized Hazelnuts
Just like the thousands of slot machines and cards tables across the restaurant's large windows, you can try your luck, otherwise, reservations are highly recommended. Las Vegas offers no shortage of celebrity restaurants, but none come close to the legacy left behind by Joël Robuchon. For more information visit www.JRobuchon.com.
Score another point for French Chefs!
Daniel Boulud is arguably the most notable chef in Montréal. See what culinary delights his kitchen is creating, here.