Welkom in Amsterdam! Also known as the "Venice of the North" Amsterdam is a world class international hub, all the while keeping a quaint, eclectic vibe with a small city feel. As its nickname would suggest, Amsterdam's central area was mapped out on a grid-like layout, lined with interconnecting navigable canals. Its manageable size makes bicycles the preferred method of transport and canal boats are also popular, but predominantly enjoyed for leisure than every day transport. For an eager foodie with a well mapped out itinerary, even by foot, the city becomes a walkable culinary wonderland of diverse cuisines. Hence the title of this piece, each restaurant is in close vicinity or directly on a canal. Coincidentally these restaurants also climb the first three classifications in the Michelin Guide: Bib Gourmand, the Michelin plate and one Michelin star ratings. I hope you enjoy discovering some of Amsterdam's delectable offerings below.

This Michelin plated restaurant brings me back to summer 2012, my first visit to Amsterdam. Dining at Envy was a pleasant find, and despite only having a few diners in the city this time around, I knew that it would be on the hit list. In bygone days homes along the canals were built to very narrow specifications because property taxes were based solely on the width of the property. As a result the trendy restaurant is set in a a long narrow 17th century building. The Dutch are known to be innovators and Envy follows suit in the culinary sense, serving a variety of inventive tapas dishes testing the boundaries of ingredient pairings from around Europe. The team of ambitious young chefs is directed by 27 year old Floris van Straalen who enjoys cooking for his guests as much as he enjoys welcoming them from the open kitchen alongside the restaurant's entrance. For more information on Envy visit www.Envy.nl . 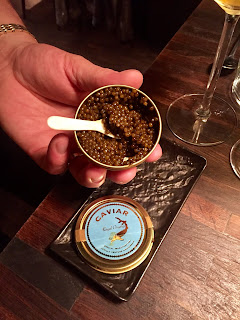 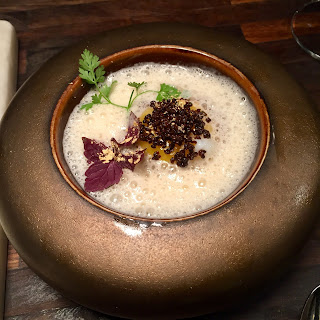 Setting the scene: This dish is named after the egg yolk being boiled to a low 62℃. This temperature keeps the yolk solid enough to stay whole, while being soft enough to "run" into the dish when pierced. The caviar is served atop the egg yolk and, get this, on the top of the diners hand. Yes, a serving of caviar was placed on the back of my hand, meant to be licked off and proceed with enjoying the dish, like a bad tequila shot...but with fine Russian royal ossetra caviar. 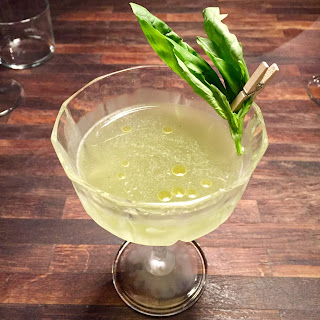 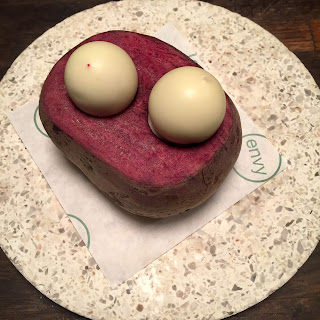 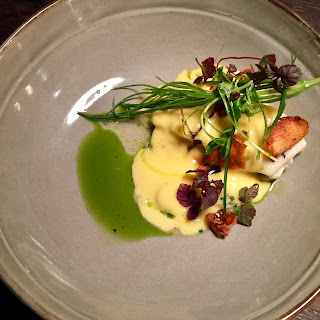 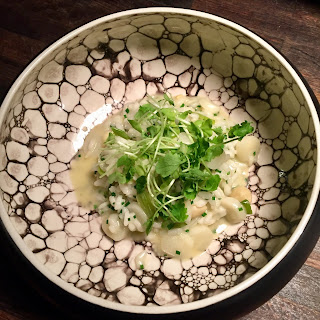 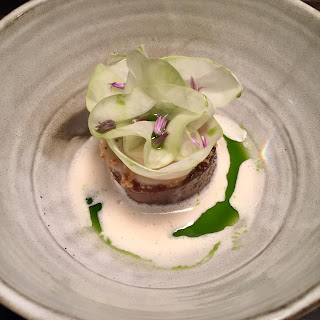 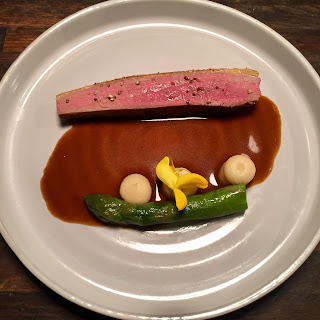 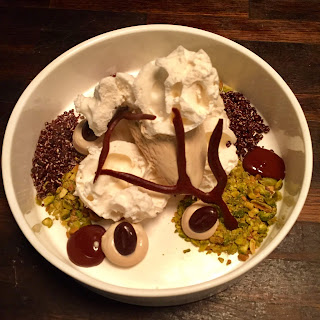 Desserts were the only survivors of my photo purging from 2012. If only I had known that I'd be writing a gourmet restaurant blog 7 years later! 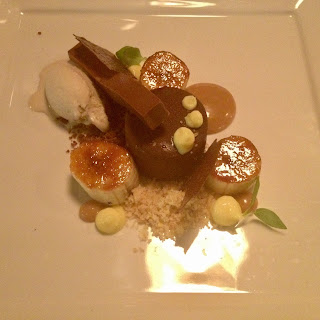 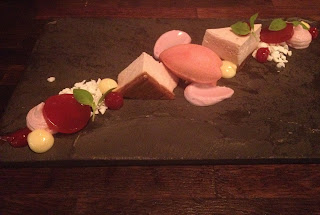 
Currently operating under the new name "Marie" since my visit to Amsterdam in late May,  Hoofdstad Brasserie is located on the ground floor of the famous historic Hotel de L'Europe (for simplicity I'll refer to the restaurant in the present tense). Established in 1896 the hotel is iconic for its architecture, its secret garden, first class service as it boasts the Leading Hotels of the World banner and a few, very well selected dining venues. At the end of the bright red lobby Hoofdstad sits directly on the Amstel River offering views of passing riverboats, bridges, and a never ending stream of tourists; a true preview of Amsterdam in a nutshell. Earning Michelin's Bib Gourmand badge, the restaurant offers simple yet delicious dishes - case study being the Cavaillon Melon soup. Unfortunately no longer in business, it'll remain alive and strong in my memory, keeping the title of best cold soup I've had for some time to come. 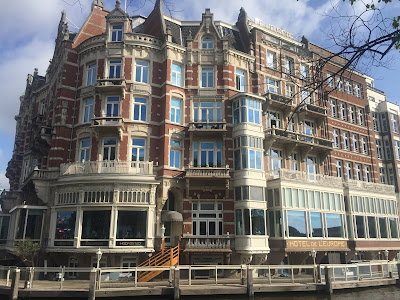 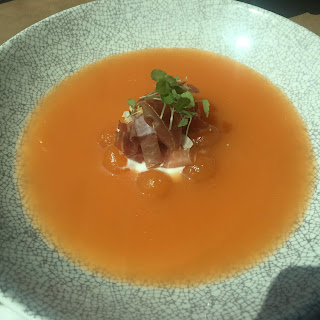 Cold Soup of *Cavaillon Melon, Dry Cured Prosciutto, Sheep's Curd
*These melons are known to be amongst the sweetest, and can only be named "Cavaillon" if they are grown in Provence or in a particular area of the Durance Valley in the South of France. 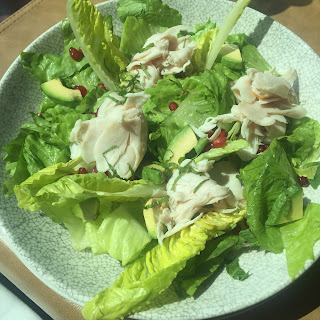 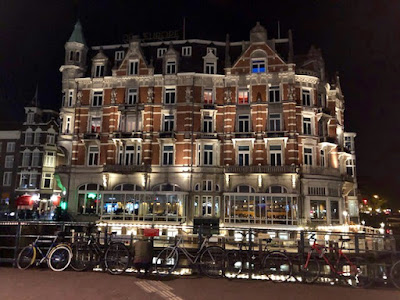 Amsterdam has some 165 canals, so it's easy to imagine that a large majority of restaurants will be next to, you guessed it, a water way. Much like Hoofdstad Brasserie, Bord'Eau is also located right on the main Amstel River canal, housed in Hotel de L'Europe, at the heart of the old city center. For my friends & readers from Montreal, yeah you, and anyone else who speaks French, you'll know that Bord'Eau quite literally means "by the water".  Some people equate space with luxury and Bord'Eau's elegantly modern dinning room has plenty of it, with enough space between tables where you can't partake in eavesdropping on your neighbors conversation. From the service to the wine list and the cuisine, this should be a two Michelin star restaurant, and it was up until one year ago when there was a change of guard. Today, new Chef Bas van Kranen is the youngest in Amsterdam to hold one Michelin star while using Bord'Eau's kitchen as his workshop to produce inventive dishes with classic ingredients. For more information visit www.bordeau.nl . 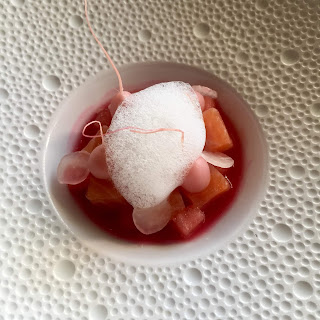 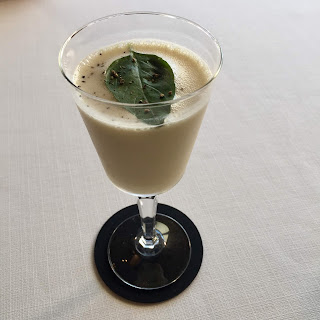 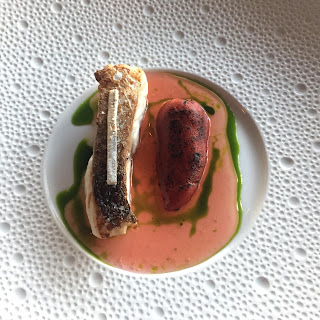 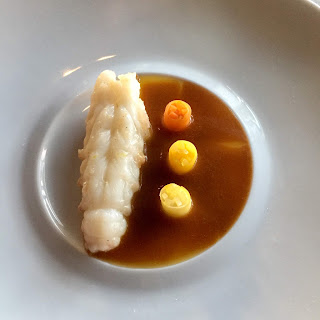 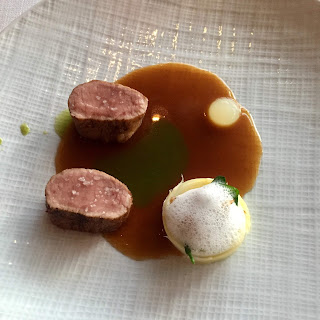 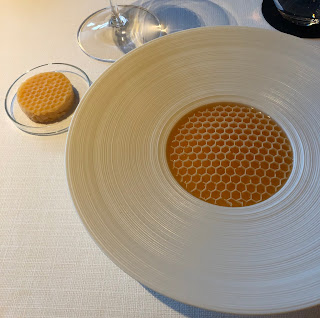 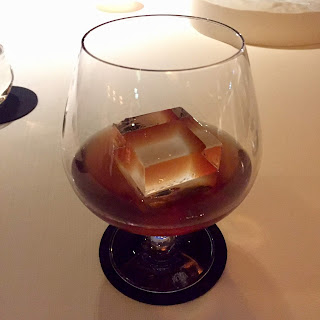 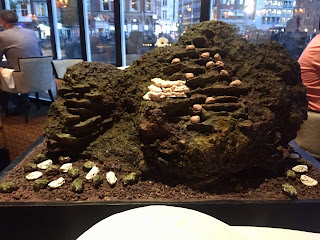 Presentation for Assortment of Chocolates 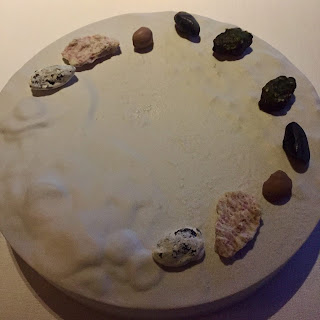 Looking back on the restaurants I dined at in Amsterdam and flipping through my photos, not only am I getting hungry again, but I'm noticing that almost all Chefs are serving a modern style of cuisine. Perhaps a coincidence that the Chefs at each restaurant was also on the younger side? Is this an indicator of times to come, a new wave of modern and inventive cooking, or is this an isolated Dutch trend? Is classic cuisine slowly becoming less relevant? Do you know any younger chefs preparing traditional Italian or French fare? Please leave your comments below. I hope you enjoyed our stroll through Amsterdam.

Whether or not you believe that modern cuisine will take over, sushi has remained remained traditional since the 16th century. Have a look at two Michelin star sushi restaurant Ginza Onodera, here.