As international as you think your city's culinary scene may be, I can guarantee that you'll have difficulty finding authentic Swedish meatballs or securing a table at a Nordic restaurant. Let's use my hometown of Montreal as an example. A metropolitan city as multicultural as they come, which once had the second most restaurants per capita in North America. With all that being said, if you set the parameters on a Trip Advisor search for Danish, Scandinavian and Swedish restaurants the results leave much to desire. Your options include the restaurant inside Ikea, yes the furniture store, a bistro and a bakery, both a far stretch from being considered Nordic. No choice, we'll have to travel to - yes, again, New York City, to find Aquavit, the only world-class modern Nordic Restaurant in the USA who specializes in Swedish cuisine.

For most people Nordic, or Swedish, cuisine evokes thoughts of pickled & preserved dishes, which is accurate. The reasons for preserving most of their fresh food, be it meat or fresh produce, is that short seasons create the necessity of making ingredients last as long as possible. The country shores the Gulf of Bothnia & the Baltic Sea providing a bounty of fresh seafood, while the land is covered in forests plentiful in game and wild greens.

Just as you'd imagine a contemporary Scandinavian restaurant, its decor is sleek and clean with dark wood floors, wood & marble table tops and tall, black contemporary leather chairs. Don't mistake its minimalistic sophisticated décor for simplistic cuisine as Aquavit has been held in high regard since its opening in 1987. Three decades later its relevance cannot be questioned, holding two Michelin stars since 2015. The guide states "The kitchen does many things well, but what makes it one of the more unique in the city is Executive Chef Emma Bengtsson's ability to take bold Scandinavian flavors and soften them into balanced, whimsical and elegant dishes". Chef's menu is built on the pillars of Sweden's 500 year old culinary traditions. Enjoy a complimentary trip to Sweden courtesy of DTST blog and Aquavit below. 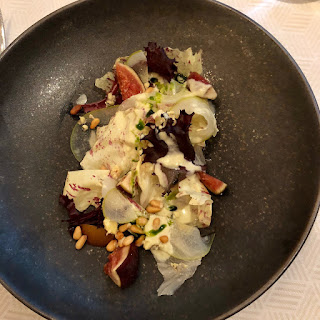 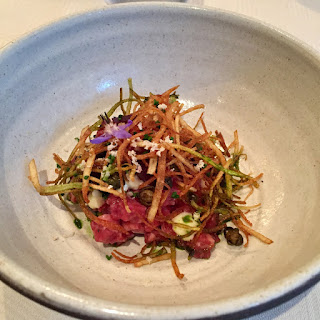 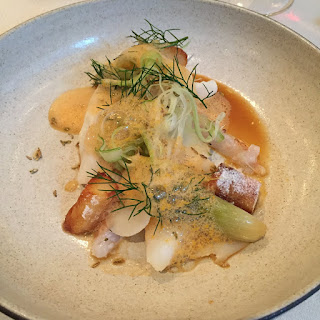 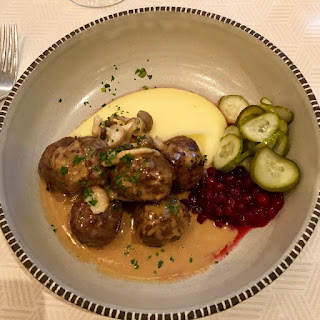 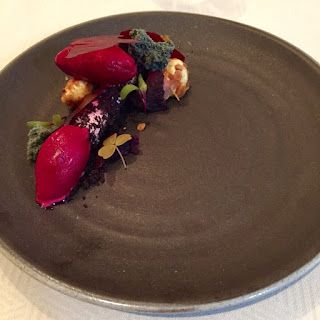 Executive Chef Bengtsson joined the Aquavit team in 2010 as pastry Chef with a style that was reflective of the region's affinity for tradition, progressive methods, and local products. With the additions of her fresh perspective to the team the restaurant received it's first Michelin star in 2013 and kept it in 2014. Emma accepted the Executive Chef position in 2014 and one year later became the first Swedish female Chef and second female chef in the U.S. to have two Michelin stars.

In addition to their contemporary fine dinning room Aquavit also offers a casual bistro bar area where they serve comfort food-style Swedish signature dishes. The restaurant also puts on seasonal events, most recently the August Crayfish festival and a traditional Swedish Christmas plate in December. Aquavit believes in giving back to the community which has made it so successful by being involved with City Harvest, a food rescue organization which helps feed 1.2 million struggling New Yorkers and saves 61million pounds of food a year. For more information on Aquavit, their menus, events and community involvement visit www.Aquavit.org.