Ah, New England and the North Eastern coast. I can't think of a better place to be in the U.S. during the cherished summer months. Perfect weather, beautiful landscapes of dunes, ocean sunsets & beachy shores - almost warm enough to swim in if you wait until August! And most importantly an abundance of fresh sea food! What comes to mind is traditional lobster rolls & oysters, right? They're delicious and will always be staple favorites, but we've all dined there and sipped that. So, let me take you off the beaten bath, away from the spots on Main Street with lines out the door, for a different kind of summer in the North East. I'm not saying these restaurants didn't have the classics on their menu, but I opted for less ordinary options. Below are highlights of some selected meals. I've been fortunate to re-visit some of the same restaurants as last year's version, so when applicable you'll see a link to that page & write-ups that are already published on my blog.

Perhaps my favorite restaurant in town, I try to get to Menton when ever I can. Their recently renovated dinning room is minimalistic with lots of concrete and mirrors. Fear not if you're enjoying your own company as they have an equally modern bar lounge. Afterwards you can visit one of Barbara Lynch's sister properties, a craft cocktail bar in the basement called "Drink". They don't have a menu, rather mixologists create custom libations based on flavors & liquor of your choice.

The last time I dinned here they were serving their fall menu. See it here.
This time the summer menu below was enjoyed. 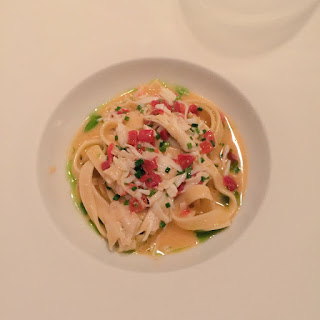 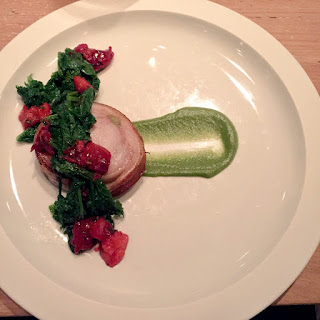 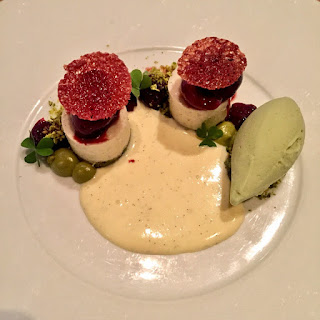 Walking around Nantucket, the quintessential New England town, and then stepping into the restaurant at the Greydon House, you'd think walked through a portal into another town. From soft colors & white white painted shingles outside, to dark leather & all wood everything inside. I can only compare it to the New York public library by candle light. Well seasoned, London born, Executive Chef Marcus Gleadow-Ware (of Michelin Starred Aureole, NYC) offers a modern take on American classics based on local ingredients. I'd love to have the exact preparation of the Foie Gras dish for you, but despite several emails & speaking with the managers, a detailed description was never provided. 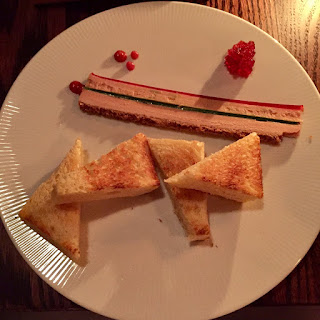 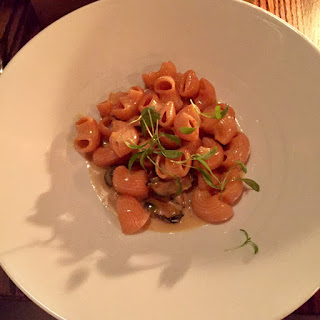 The view from the lawn at Castle Hill Inn over looking the Newport harbor is where every New England post card gets its inspiration. Dozens of white picket chairs overlook the waterway busy with sailboats swooshing by. Last year there was heavy fog over the harbor and the view left much to be desired, but the meal was delicious, have a look here (fifth restaurant on the list).
This year the skies were clear, sun was bright & dinner below. 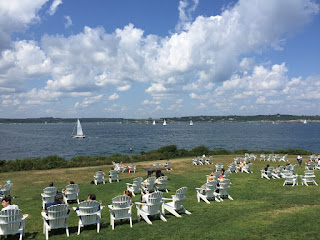 The Lawn at the Castle Hill Inn 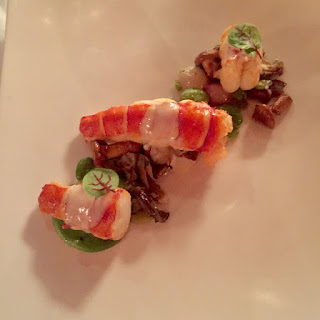 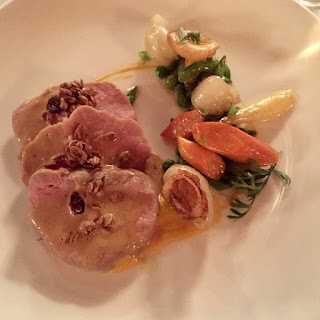 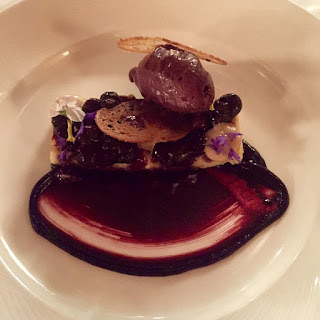 Mystic is a small quaint town on the shores of southern Connecticut. Known for being a strong whaling community beginning in the 1830s, it's rich in history and today is home to the USA's largest maritime museum, among other historic sites. In more recent references you may have heard the town's name through movies such as Mystic Pizza (1988) with Julia Roberts and Mystic River (2003) with Sean Penn. Mystic River, however, was filmed in the Boston area, but Mystic Pizza was indeed filmed in Mystic, in a pizza joint which is still in business today.

A reason for gourmet foodies to remember Mystic going forward? The town is host to one of the few Relais & Chateaux Properties in New England, and the only property in the USA to join the Relais & Chateaux banner in 2017 - only 4 months after opening, The Spicer Mansion. I got a chance to speak with the owner, Brian Gates, who explained how the home was originally built in 1853 by a prominent mariner at the time, Elihu Spicer jr. After being neglected for several decades, Mr. Gates purchased the property and helped restore it to its current splendor. The results are impressive, including original moldings, floors and Tiffany ceiling art, you have to see it for yourself.

The kitchen is manned by Relais & Chateaux and James Beard nominated Chef, Randy Rucker. I also got the chance to speak with Chef in the hotel's speakeasy - no, I'm not revealing its location. On first impression you would think that he's in a rock band, and he very well may be, but it's clear that he's passionate about his craft in the kitchen. Randy is a strong believer of knowing where & who your produce & ingridients are sourced from and how they got there. The result is a menu that is generous in seafood options and very local & seasonal, being mindful of only using the freshest ingredients. 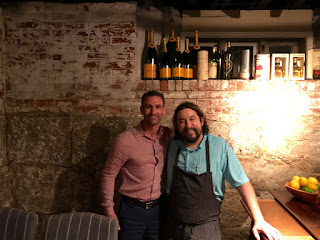 Myself with Executive Chef Randy Rucker 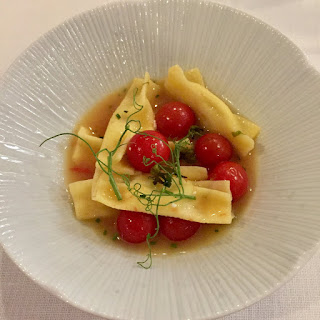 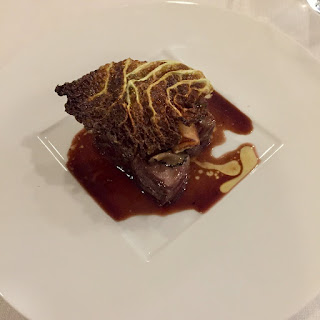 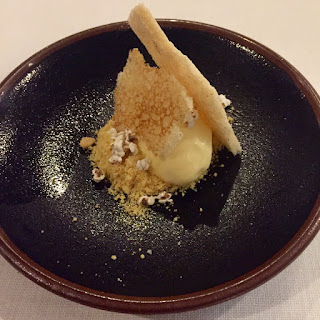 The EMP Summer House Pop Up may sound familiar to regular readers of Dined There, Sipped That because it was also on the line up of last summer's New England tour (Second on the list). The good people at Eleven Madison Park originally envisioned a one time pop-up, but due to its success they announced in February 2018 that the summer house would be returning for another season. With things going so well they even have a Winter House opening up in Aspen at the end of 2018, but lets get back to the present below. 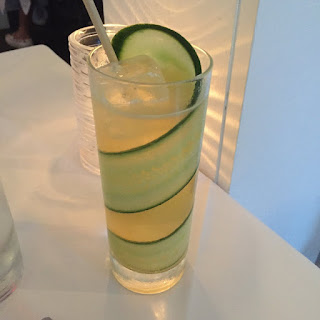 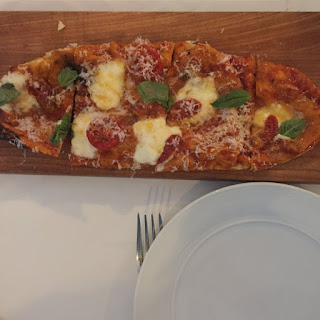 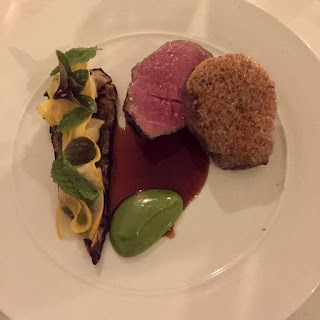 Do you happen to recall the piece where I wrote about that Chef at Marea, whose cooked for several former Presidents? Well allow me to re-introduce Chef and owner Michael White who crafts the hand made pastas served at Ai Fiori. Meaning "among the flowers", the restaurant is on the second floor of the Langham hotel and overlooks buzzing Fifth Avenue in Midtown. Chef de Cuisine Scott Schneider and his team offer French & Italian Riviera cuisine with a modern flare. The seasonal Mediterranean menu garnered the attention of the Michelin guide, having earned the Ai Fiori team one Michelin star in 2012, and keeping it every year since. Recently receiving the Grand Award by Wine Spectator, indulge in their wine list to pair with the finest cuts of meat or "the greatest dish in the world" coined by New York critic Steve Cuozzo, their signature lobster dish. Lunch is offered in a two, three or four course menu in the lounge for a more casual environment if you're on the go, taking in the sites. 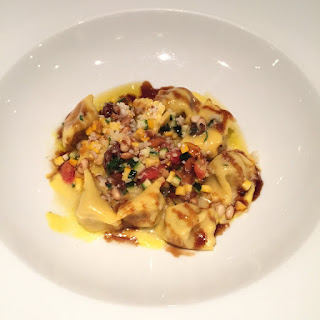 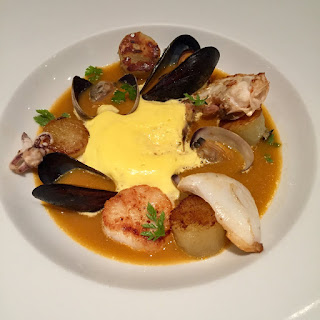 I hope you enjoyed the second installment of the Eating My Way Through New England series. Whether you have a curated palette and are searching for established chefs starting a new adventure, or if you prefer a good ol' plastic bib lobster bake, these coastal states will definitely have something to delight you. The Northeast's bounty is a-plenty during these summer months, from seafood to fresh produce, not to mention some outstanding country side & scenery. Put it on your bucket list and I'll be glad to help you out with the restaurant itinerary!