Why Manhattan institution, Carnegie Deli, closes its doors after 79 years

When I read the news that one of the oldest Jewish delis in New York City was closing it's doors  I was grateful that years ago I had the chance to enjoy two meals at Carnegie Deli. Just a few blocks away from Time Square the #571 restaurant in NYC as per trip advisor does attract its fair share of tourists, and lines around the block are typical for their 4 inch pastrami on rye sandwhiches. On my first visit circa 2004 I was as shocked as anyone to see a club sandwich I could barely hold on the dish in front of me, and the photo's of forgotten celebrities on the walls added a touch of nostalgia. Opened since 1937 and featuring in a number of movies it's become one of the most well known deli's in the world. Ted Merwin from the New York Post summed it up quite well when he wrote "Since 1937 the Carnegie skyscraper sandwhiches and obnoxious waiters encapsulated the very ethos of excess that characterized New York as a whole". Pastrami lovers rejoice as the name will live on through Carnegie Deli's licensed products, their Las Vegas & Bethlehem, PA locations and in sport venue food courts. If you're in New York this fall it's your last chance to try out the joint for yourself before they close for good on December 31. Carnegie Deli has had it's share of headlines, good and bad, since 1937. Find out what led to their permanent closing here. Have you ever been to Carnegie Deli? Let me know what you thoughts in the comments. 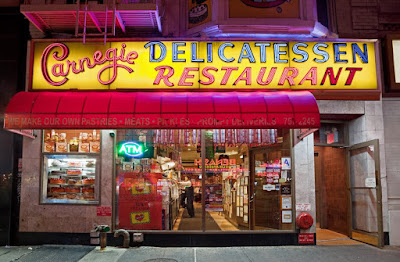 Diner food is delicious, but a tad bit unhealthy. Still it doesn't compared to the most unhealthy meal served in America seen here.