A 2 hour & 20 minute bullet train ride North East from Kyoto later, you'll arrive in Tokyo. A relatively quick commute to cover the 460km of rather sleepy country side separates the two Japanese cities which are worlds apart in feel. Snow dusted Mount Atago is replaced with cloud piercing sky scrapers, and a calm serenity is replaced with the 24/7 buzz of neon lights in Takashimaya Square. Amongst a plethora of other historical & cultural sites, Tokyo is also the city with the most Michelin stars in the world and home to restaurant Sant Pau.

Until recently Sant Pau Tokyo was one of two same name restaurants lead by one of the most awarded female Michelin star Chefs, Carme Ruscalleda (7 stars to be precise, the same as Thomas Keller). In October 2018 she willingly decided to close the original Sant Pau in her home town of Sant Pol de Mar after 30 years of success and holding three Michelin stars since 2006 - the only three star restaurant in Spain at the time. In 2004 Sant Pau Tokyo opened its doors in an exclusive part of the city centre. The restaurant has a Catalonian modern design blended with stylish Italian & Spanish antique furniture, Baccarat crystal glassware complimented by Joan Miro art and a wine cellar bar & partitioned cigar lounge. With the same atmosphere and decor, right down to the cutlery, of its sister restaurant, the new Sant Pau quickly won over local dinners, helping fill a void by being one of only three fine dinning Spanish establishments in the city. Resemblance was not only in design and philosophical gastronomy, but also in success as Sant Pau Tokyo holds two Michelin stars and is a Relais & Châteaux member. Well accustomed to working in the highest standards of Michelin environment, Yousuke Okazaki was promoted to Executive Chef in 2009 and offers classic Catalan cuisine in a modern way, with a Japanese influence.

The aforementioned philosophical gastronomy is evoked by inspiration. For example, her last tasting menu before closing the Spain location was inspired by moments in the history of the restaurant. The current Tokyo menu is inspired by the 12 constellations, and the inspiration of the menu during my meal below was the leading flavor and ingredients in each dish. 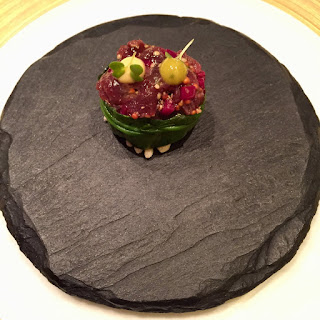 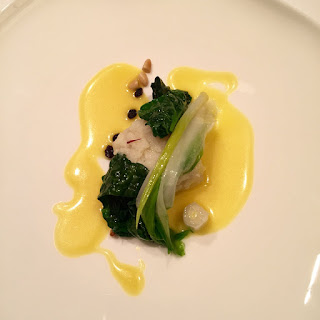 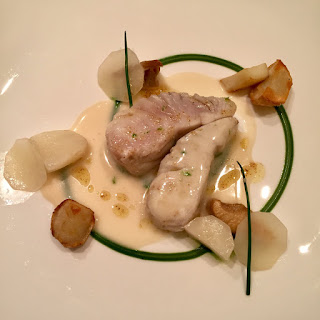 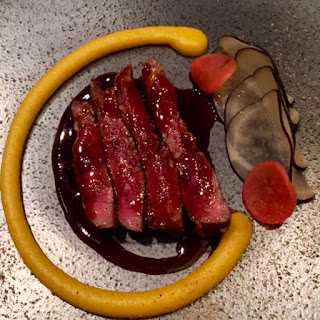 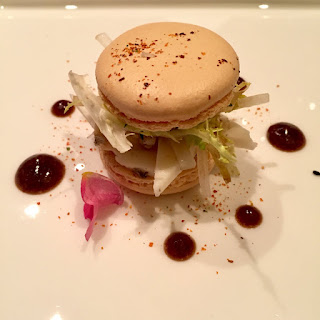 *Shichimi Togarashi - Garrotxa Cheese, Vegetables, Espresso
This appears to be a dessert, but the macaron is espresso flavored, *shichimi togarashi is a Japanese 7 spice blend seen atop and around the macaron, and the contents are the garrotxa Spanish goat cheese and greens 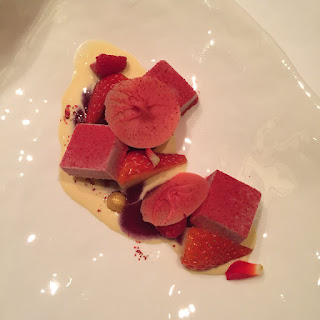 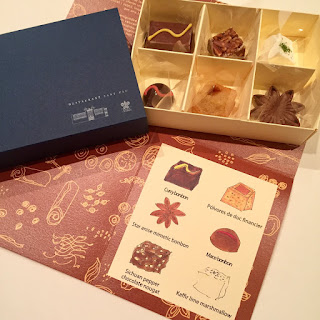 Would you believe that such success came with no formal culinary training, rather from focus, drive and motivation to push boundaries of what's expected. It all came to fruition from opening a deli in 1988 and the idea of "taking liberties and freedoms of cooking things in a different way." At age 67 Carme Ruscalleda is looking forward to turning the original Sant Pau space into a culinary learning center. A place to study and discover new techniques, perhaps even mentor the next top female Chef. For more information please visit www.SantPau.jp .

From the world's most Michelin starred city to the third, have a look at Yonemura in Kyoto here, where Chef doesn't limit himself to one particular culinary method.