To expand on my comment that Borgo San Jacopo deserves a second Michelin star; this is a theme that I also came across at Il Palagio & Winter Garden by Caino throughout my dinning experiences in Italy. For those of you who follow Dined There, Sipped That - you'll notice that this is the first time I've made such a claim. Coincidentally, its also my first time writing about Michelin star restaurants in Europe since starting DTST. I've mentioned before that I'm not, nor trying to be, a food critic, so this opinion piece is influenced by comparison and experience only.

Reflecting on my restaurantography in Florence; The level of service, the venues, the difficulty of execution, the availability & use of rare & exotic ingredients. Everything was without a doubt superior than many one Michelin star, and just as good as two Michelin star, restaurants I've dinned at in the U.S. In all transparency, on several occasions I've dinned at one Michelin star restaurants in New York where not only did I not think they deserved the star, but even chose not to blog about them. It seems as though Michelin star restaurants in Europe are held to a higher standard than in the U.S. making it more difficult to attain a second star. The Michelin guide sends random inspectors each year to restaurants all over the world, and so one would hope & expect that eventually any unfair comparison of standards would sort itself out, but this isn't the case.

I'm not suggesting anyone works more or less in an effort to achieve the success of a Michelin rating, but it's difficult to makes sense of a food cart in Singapore receiving one Michelin star, then awarding Borgo San Jacopo, for example, the same recognition. It doesn't add up. If the Michelin guide & its inspectors hold contrasting standards from restaurants in different parts of the world to attain the same levels of recognition, then everything becomes relative to restaurant in question's location, and then what? This would make the Michelin guide unreliable on a global scale and only valid within the country in question. What's the answer, or approach, to go about standardizing recognition throughout the world? That's too big a task for this blogger. For all I know they are being relatively comparative to different cultures, but I regress. Going back to my first comparison, Florence and New York are both first world cities when it comes to dinning, so the disparity in comparison shouldn't be so large.

Don't get me wrong, I'll still continue enjoying such restaurants in New York City, and maybe even that street cart in Singapore if ever I get the chance. I mean, someone has to, right? Simply put, this piece was just to point out the difference that I saw at three one Michelin star restaurants in Florence and one Michelin star restaurants in the U.S. I hope my first opinion piece somewhat made sense, and engages you to be discerning the next time you're dinning out and looking up reviews & ratings. 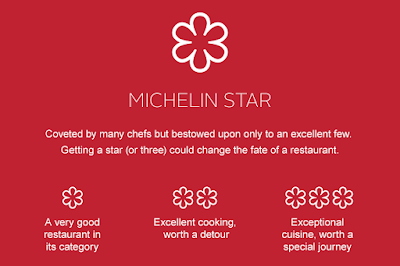 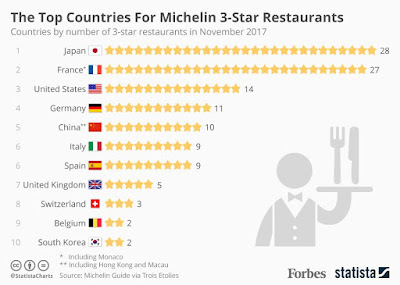 For more information on the Michelin guide's "Who, What, When, Where, Why" see my post here.

For a recap of the three restaurants in Florence who brought me to writing this piece see below.
Borgo San Jacopo
Il Palagio
Winter Garden by Caino