The Best of Louisville, Kentucky

If you look at a map of the United States one wouldn't quite describe Kentucky as "the South". But after spending a few days in the quaint city of Louisville I learned that "the South" isn't necessarily geographic as much as it describes a culture, way of being and a way of life. What the city lacks in size it makes up in Southern Charm with it's blend of new & old architecture, revitalization of neighborhoods each with their own appeal, and a rapidly growing restaurant scene. The influences of the bourbon whiskey industry are omnipresent, but for one weekend every year there is one event that takes over. The locals consider it a holiday and the entire city immerses itself in it, the Kentucky Derby. Some 158,070 spectators (seventh in attendance history) filled up Churchill Downs on May 6th to witness "The fastest two minutes in sports" for the 143rd time as Always Dreaming took home the rose garland. I gained a great appreciation for the sport & culture of horse racing...and you know I hit up some great restaurants! I hope you enjoy my "Dined There, Sipped That" throughout the city of Louisville, Kentucky.

Housed in a 19th-century brick building that used to be a family run grocery store and neighborhood meeting spot, Butchertown Grocery is now a serving "approachable food" in a "restaurant for the people" as described by Executive Chef & Owner Bobby Benjamin. Between the sleek marble tables and the weathered wooden ceiling is where the magic happens; the food and the drinks.
www.ButcherTownGrocery.com 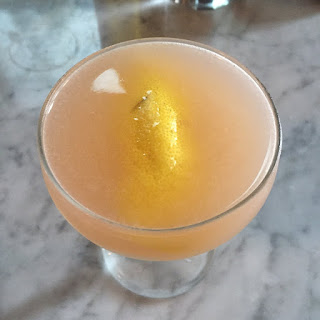 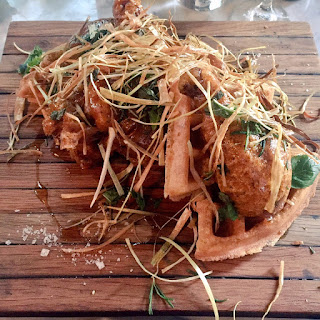 Chicken & Waffles - Chiles, Fried Rosemary & Leeks, Mint, Syrup
Only the second time I've had C&W in my life, but definitely the largest I've ever seen. The photo doesn't do its actual size justice, and I'm still asking myself how I polished that cutting board clean.

Whether or not you enjoy the hooch which gives first timers fire breathing abilities after just one sip, no visit to Kentucky is complete without a bourbon/rye whiskey distillery tour. A few turns off the commercialized and mass produced Bourbon Trail is the small batch Willett Distillery. The smaller group size allows the tour to get so inviting that visitors are welcomed to stick a finger into the fermenting yeast and give it a taste...if that's your thing, of course.
www.KentuckyBourbonWhiskey.com 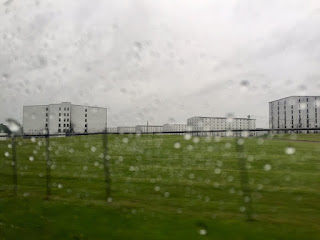 Driving by Heaven Hill Distillery's much larger bourbon aging rack houses on the way to Willett. Our tour guide told us that Willett could fit all of their barrels into just one of Heaven Hill's rack houses and there would still be space for more... That's a lot of bourbon. 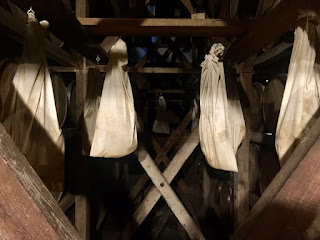 Although the Willett distillery has been around since 1936 its clear that they also have a progressive enthusiasm, lending out their used barrels for other distilleries to age their spirits in, inviting pop up chefs in their soon to be restaurant, and other similar collaborations. The photo above illustrates such an example where the experiment is bourbon infused cured ham by hanging  the charcuterie in a Willet rack house.

By way of my foodie research and meals enjoyed in Louisville, I can confidently say that Proof on Main creates it's unique identity by being the most contemporary & eclectic restaurant in the city. Executive Chef Mike Wajda prides himself on using seasonal local ingredients from farmers and artisinal producers to serve a modern cuisine keeping to traditions of the South. Proof on Main's beverage & wine program has brought attention and recognition by Wine Spectator, Food & Wine magazine among others.
www.ProofonMain.com 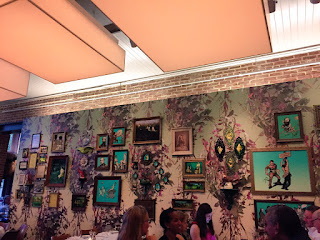 To compliment the local modern cuisine, Proof on Main displays a rotating collection of art by local artists. Each room has a different theme sure to entertain any lover of contemporary art. 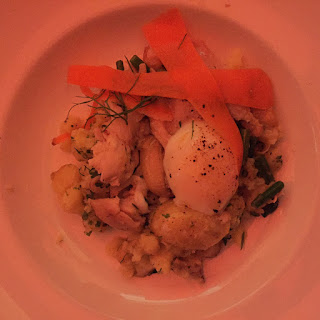 In Louisville's NuLu district, one of the aforementioned growing neighborhoods, is Decca.
With a cellar lounge in the basement opened all week long it's no surprise to see locals and tourists alike beginning their evening as other's are finishing up their dinner. The historically renovated 1870's building also houses two small dinning rooms on the ground & top floor with an inviting fire pit court yard outside. 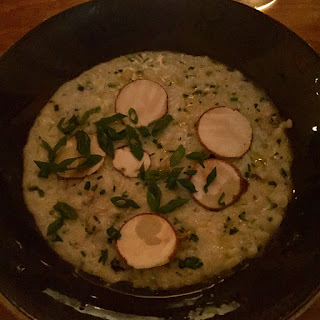 Delicately prepared local ingredients made up the evening's tasting menu put together by Executive Cheff Annie Pettry, who's passion for quality and technique garnered the attention of New York Magazine, Food Network and Food & Wine Magazine (2014 The People's Best New Chef nominee) to name a few. Fun facts; Pettry can be seen competing on Season 14 of Top Chef on the Bravo network and grew up in Asheville, NC, a few hours from where I currently reside.
www.DeccaRestaurant.com 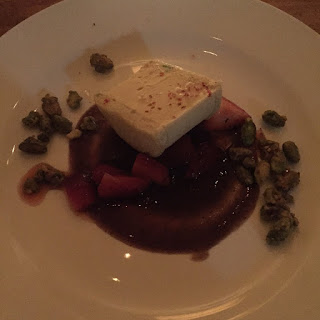 Vanilla Malt Ice Cream Sandwhich, Pistachio, Strawberry, Rhubarb
Once more, lighting "to set a mood" quickly became an issue for my photo opps. I promise you that the meal was much better than the quality of the photograph!

When it comes to "farm to table" dinning, harvest is the literal definition and Igor Chokowski is the real deal behind it all. Igor went from an omelet stand operator at a farmers market to the owner of Harvest and is also a farmer himself. His titles include TED talk speaker and leader in the regions small farm movement to name a few. He took the time to stop by the table and chat a little to explain what Harvest Restaurant is all about. Along with Chef Patrick Roney, in 2012 Harvest was a semi-finalist for the James Beard Award for "Best New Restaurant".
www.HarvestLouisville.com 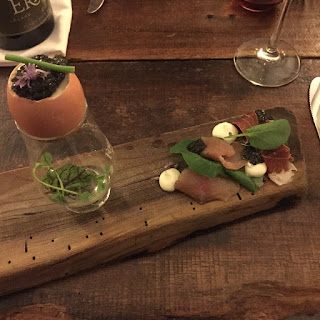 Smoked White Creek Trout & Ham Custard - Paddlefish Caviar, Maple Crema, Chive Blossom
80% of the ingredients at Harvest are sourced locally from within 100 mile radius and baked, cured, preserved and smoked in house - just like the trout above. 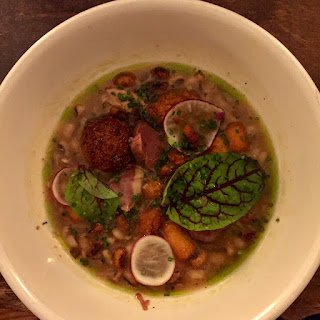 Harvest Burgoo of Rabbit, Bison & Squab - Ivor's Black Eyed Peas, Smoked Tomato Dumplings
I had never eaten, much less heard of "burgoo" before, which is a type of rustic meat and vegetable stew. Back in it's time of inception burgoo would be prepared communally, I imagine by way of everyone bringing an ingredient they had available. 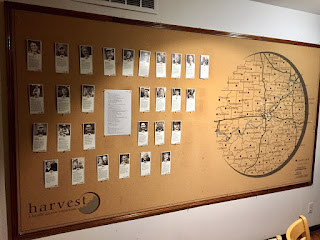 Harvest's interior had lots of warm lighting and re purposed wood, using old doors as table tops, embracing any imperfection. Up on one of the walls was the local farms board showing what came from where and by who.

Le Moo was a little out of the way, but well worth it for a comfort food brunch at a restaurant voted "One of the best spots for steak in America" as per the Food Network. With their 3$ French Champagne Bellinis, they had me at hello. The brunch menu was not for the light meal seeker, but still Executive Chef Chip Lawrence delivers every dish with a sophisticated style of Southern comfort fare. And if you want a little luxury with your biscuits during brunch, ask to be seated in the vintage Louis Vuitton booth, crafted with authentic leather from the French luggage house. 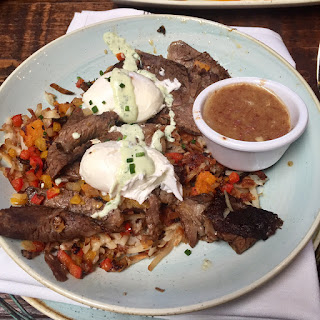 "Not Your Father's Oldsmobile"
"Pulled Short Rib with Everything Good"
Hash of Pulled Guiness Marinated Braised Beef Short Rib, Crispy Hash Browns, Sauteed Butternut Squash, Caramelized Onions, Peppers, Poached Eggs, Chive Creme, Red-Eye Gravy
This may not be the best dish to illustrate chef's "sophisticated style", but a "hash" by definition is a piling of several ingredients. Take my word for it, it was beautiful on the palette! 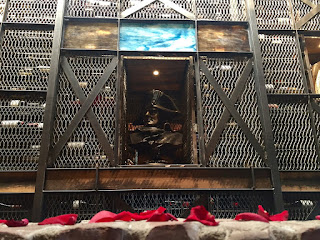 The restaurant was outfitted with all custom dark wood and heavy metal works interior, such as this wine storage rack with functional sliding doors. The rose petals on the ledge of the booth represent the garland made of over 400 roses given to the winner of the Kentucky derby. 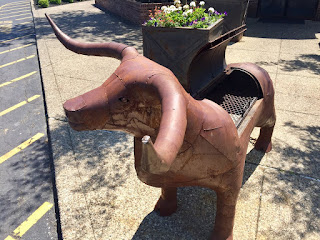 Outside was this functional bull shaped charcoal grill. The best part, on the front side the smoke escapes from its nose, and on the back side the smoke comes out of its...

I enjoyed my time in Louisville & taking in all that the Kentucky Derby had to offer. The quality and diversity of all the restaurants impressed me, and there are still a few more mentionable one's which there weren't enough meals for. A suggestion for the party-goer, if ever you end up in Louisville, check out 8up rooftop restaurant & lounge, the closest you'll feel to New York City in Louisville. I hope you enjoyed my Best of Louisville, and remember, the locals pronounce it "Loo-uh-ville".  Stay tuned for another "Best of" piece in the coming weeks. As always, thank you for reading my blog.