I walked into Betony, located minutes from Central Park South, for lunch on a recent visit to the city that never sleeps. There were some Midtown business men finishing off their meals, and some spots at the very well appointed bar where I sat to enjoy the show. I began chatting with the bar tender and he suggested I try a Russian vodka which is artisanal so, that the supplier visits the restaurant personally to refill the same hand painted bottle every time it's fully consumed.

"Jewel of Russia Ultra" vodka, hand made and hand painted bottle below 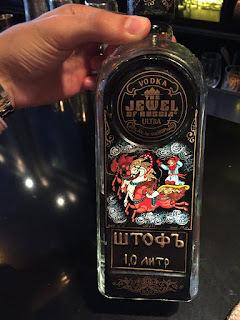 Instead, I Sipped That on a "The Socratic Method" - Gin, Hemlock, Pineau des Charentes, served in a carafe in a chilled brass cup.

I wasn't sure what to expect from this wood paneled, very well appointment, luxurious space in the heart of the city, other than excellent service and refined modern-American cuisine. My expectations were set high as Executive Chef, Bryce Shuman, and General Manager, Eamon Rockey, had previously worked together at a very highly acclaimed restaurant in the city. Betony opened in the summer of 2013 and just one year later the team was awarded one Michelin star, which they've kept to this day. I was pleased to find out that their tasting menu was also offered at the bar for lunch. The Chef's tasting was  adventurous and creative, taking full advantage of the latest cooking techniques. Enjoy my Dined There at New York City's Betony. 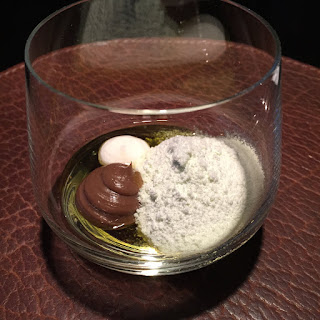 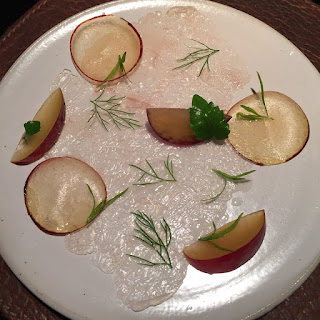 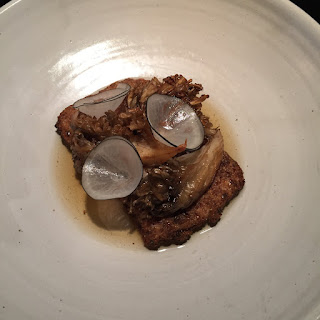 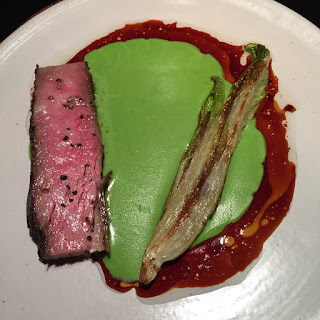 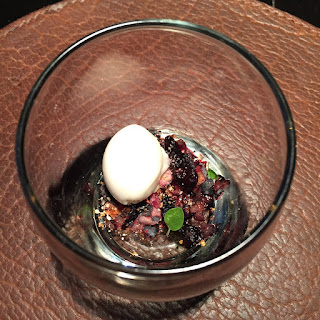 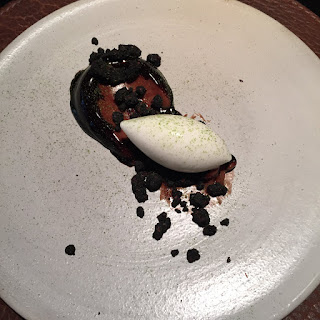 For being the loyal blog follower that you are, I'm going to let you in on a little secret...Half way through the pasta course - Hen's Egg Cavatelli - I paused and realized I forgot to take a photo...But I was enjoying it so much that it didn't bother me.

The way Betony describes menu items is quite simple compared to their creative delivery, and as a dinner I enjoyed being surprised at how they presented each dish. Fun fact about Executive Chef, Bryce Shuman is that he's originally from Chapell Hill, NC, a 30 minute drive from where I currently reside. I hope you enjoyed my Dined There, Sipped That at Betony, New York City. For more information on Betony visit their website - www.Betony-nyc.com .

Speaking of North Carolina, have a look at my post on The Fearrington House, a world class restaurant in my own back yard.